Check Out a Deleted Scene From Up 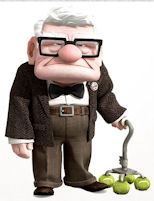 Pixar’s “Up” won’t be released on DVD until Nov. 10, but fans of the animated summer smash can catch one of the film’s deleted scenes online now.

“Up” tells the story of Carl Frederickson, an elderly man who, following his wife Ellie’s death, decides to fulfill their childhood dream of moving their house to Paradise Falls in South America. He attaches thousands of wholesale balloons to the house so he can float to Paradise Falls, but his journey doesn’t go according to plan when a young Wilderness Explorer named Russell stows away on his porch.

Once they get to Paradise Falls, Carl is also joined by Kevin, a large bird, and Dug, a dog who is able to communicate through a talking collar. But when Carl’s childhood hero wants to kidnap Kevin in the name of science, he and his new friends must get the bird to safety before Carl can fulfill his dream of placing his and Ellie’s house next to the falls.

I absolutely loved this film and I’m looking forward to the DVD release, both so I can see the movie again and so I can check out the special features. The movie had just the right balance of comedy, family fun and emotion that is bound to tug at your heartstrings.

This deleted scene is another goofy interaction between Dug and his canine comrades, as the other dogs try to trick Dug into staying out of their way.

And if you love Pixar, you will want to see this funny video.