Closer Images of Henry Cavill as Superman in ‘Man of Steel’ 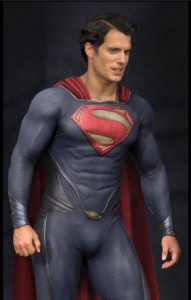 Ever since the first image of Henry Cavill as the Man of Steel was released, all we have seen so far of the suit has been low-quality pictures but now, thanks to “wacots,” we have now much better photos of Cavill’s suit.

Before I give my opinion on the close-up images of the suit, I must congratulate the people who took these photos – how did they manage to get such good, close shots? Must have been an extremely good camera with an incredible zoom or maybe taken by some people that do work at the set?

Moving on to what we see here — I’m much more relieved now and, actually, a bit more positive about the movie. It definitely looks like they are heading towards making the suit look more like armor than tights, especially with all the silver lines and the addition of the silver cuffs, which is similar to what they are doing in the DC Comics reboot.

One thing I’m skeptical about is that the cape is way too long. On the bright side, at least Snyder didn’t overdo it with adding the darker parts to Superman’s costume, like Bryan Singer did five years ago. The second thing that bothers me is that the suit is, in fact, dark blue like the Returns suit, but that’s just a little technicality that I can live with.

I’m definitely not missing the red shorts, even though I never had anything against it. The absence of the yellow S on the back is something that I miss, but at the end of the day, it’s not the suit that defines whether the movie is good or not, it’s the man himself.

Overall, I’m much more satisfied with what they have done with the suit and from what I have seen from photos and videos that have been taken during shooting, I’m actually starting to feel that this movie might deserve a better chance than I have personally been giving it. After all, it’s something that Chris Nolan is part of and he hasn’t disappointed me so far. I’m still wondering though why Zod is running around in a motion-capture suit — only time will tell.

“Man of Steel” is flying into theaters on June 14, 2013. Let me know what you think of the closer looks at the suit in the comment section to the right.