With a week that has brought us our first official poster for Neil Blomkamp’s “Elysium,” we now are being treated to the first official trailer as well. 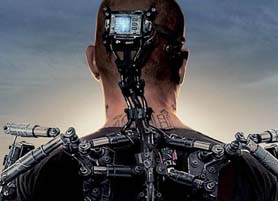 The “District 9” director already has my interest piqued with just his name being attached to the film, as I think “District 9” was one of the best Sci-Fi movies of the past few years — especially given its low budget and what he was able to do with it.

I can’t wait to see this massive story with nearly four times the resources at his disposal.

“Elysium” is set in the year 2154, where there are now two classes of people: the ultra wealthy who live in pristine conditions floating on a man-made satellite called Elysium; and the rest who live on the overpopulated and disease ravaged Earth. Those who live on Earth are desperate to escape the slum planet that Earth has become, as well as the crime and poverty which has ravage and ruined the planet.

There is state-of-the-art medical care on Elysium that provides its residents with rejuvenating benefits that are much needed on Earth, but some will stop at nothing to prevent immigration of those below up to the luxurious floating haven in order to preserve the lifestyle and peace of its prosperous residents.

One man who will risk his life to infiltrate the heavily guarded fortress above in order to bring equality to the two sanctions is Max Coburn (Matt Damon), a 29 year-old in desperate need of the medicinal advantages afforded by those on Elysium. He will take on Elysium’s mayor, Secretary Rhodes (Jodie Foster), and her high-tech army in order to accomplish his goal. If he can succeed, he will not only change his fate, but also the fate of the millions suffering back on Earth.

“Elysium” is Blomkamp’s sophomore film and he has brought back the star of “District 9,” Sharlto Copley, as well as assembling a top-notch that includes Alice Braga, Diego Luna, William Fichtner, Johnny Cicco, Emma Tremblay and Wagner Moura to pull off this massive project.

Check out the trailer below:

This trailer continues to show off Blomkamp’s impressive style and the massive scope of the project. Showing us a dark and decimated Earth that looks almost post-apocalyptic, and comparing it to the pristine and peaceful halls of “Elysium” floating in space, we get an idea of the massive scope of the world created to tell this story. The film is very much an action packed sci-fi film, but it also has heavy video game influences as well as a much larger political and social subtext to it. From what I can see, the effects and action look amazing and will be top-notch. The look and feel of the Earth reminds me much of the grimy locale and themes of “District 9.”

The trailer only gives us a few glimpses of the many other actors aside from Damon, but then again this is a first teaser trailer and I am sure much more will be revealed in the coming months. I am excited for the film and have been for months now and this trailer just reaffirms my hopes for the movie.

I’m not sure yet exactly what the robotics Matt Damon’s character wears do, but they appear to give him some unearthly skills and will help him in his journey. Although this trailer doesn’t show it at all, Neil Blomkamp has very violent taste when it comes to action so I am sure the film will probably be looking at an “R” rating. Then again, with the bigger budget and backing from Sony Pictures Entertainment and Columbia Pictures for distribution, he might need to appease the studios and secure a PG-13 rating.

So what are your thoughts on this first look into the world of “Elysium?” Is it what you were hoping for or did it surpass your expectations? Leave a comment and let us know.

“Elysium” will be breaking its way into theaters Aug. 9