Filmmaker Losing His Sight, Not His Vision

Chicago-area screenwriter and director Jack Marchetti is in a race against time to make his full-length feature film before losing his sight to degenerative eye disease, cone rod dystrophy.

His screenplay for the gritty crime drama “4 of a Kind” was previously chosen as a top contender for Project Greenlight back in 2005. “Now is the time to get this film made,” said Marchetti. “I want to make this movie while I still can, and, more importantly, be able to see it once it is made.”

After almost a decade toiling away at his beloved screenplay and seeing the crippling affects of the same degenerative eye disease on his older brother, Jack Marchetti realized if he ever wanted to see the film, he would have to make it himself. Although his degenerative retinal condition is robbing him of his sight, it has not deterred him from pursuing his vision of making a quality film.

Realizing that the nature of his eye disease can be unpredictable, Marchetti has started gathering a cast and crew and will set out to make “4 of a Kind” a reality. In an effort to raise the funds to get his film made, Marchetti has set up a Kickstarter campaign beginning today. In making “4 of a Kind,” he wants to be able to shoot a quality film and involve as much of the local Chicago filmmaking community as possible.

“4 of a Kind” follows a group of friends who grew up in the seedy underworld of the Chicago crime syndicate. After one of them returns from his time in the military, his friends and former boss are unaware he is now working undercover to take them down.

The film will be shot in and around Chicago and Marchetti is optimistic his Kickstarter campaign will fully fund the project. He is ready to push ahead, full steam.

“I don’t want people to feel sorry for me. I want people to be inspired that I am going to do this to fulfill a dream and show others that it can be done … even in a tough business like filmmaking. I’m hopeful that our campaign will be realized at the full goal,” he said.

Marchetti wants his film and his degenerative condition to bring attention to the millions of people in America and worldwide afflicted with conditions that eventually cost them their sight.

Visit the film’s official website at www.4OfAKindFilm.com. Or go HERE to contribute to the film’s Kickstarter fund. 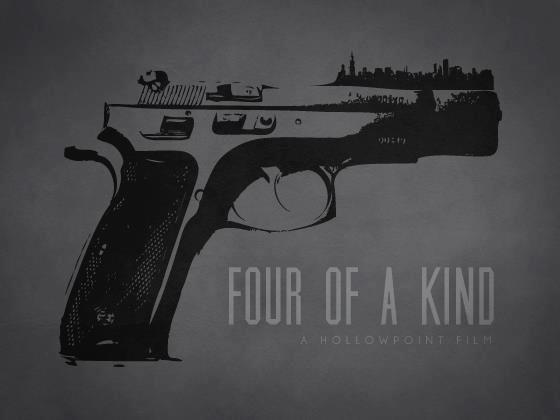