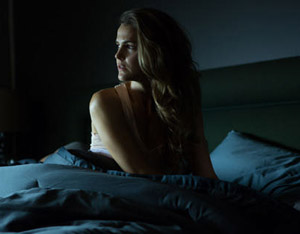 With just a few days until its release, Dimension Films has unveiled five short clips from the upcoming thriller “Dark Skies.”

“Dark Skies” follows the trials of a normal, happy family, the Barretts, after they are targeted by a malevolent force – which has its own dark plans for them. When strange and bizarre things begin to happen to them, their paranoia and fear begin to isolate them from their friends and loved ones.

When an expert is called in to help, he says he has dealt with similar situations before and that there is no hope for escape; once you have been chosen, it’s too late. With a fighting spirit, they take a stand to defend and save the ones they love, but how can you combat a force you do not understand?

Some of these clips we have seen parts of in the trailer (you can see it HERE), but overall they are just expanding on the creepiness and thrilling nature of the film. The clips set up the beginning of the strange occurrences in the Barrett’s house.

In the first clip, Lacey (Keri Russell) awakens to hear a strange noise in one of her boy’s rooms and goes to investigate only to be startled by a shadowy figure in the dark. But did she just imagine it? The clip is so dark I couldn’t really see a thing, but I have a feeling that it is on purpose and the entire film will tease us by hiding the actual aliens until near the very end.

This second clip is shown in the trailers and is one of the more disturbing scenes because it showcases three separate migrations of birds basically going all kamikaze and committing suicide directly into the house, and Lacey is witness to all of it. I honestly don’t know what I would do if I were in her situation – that is pretty freaky.

This next clip is showing some unnatural behavior by the adults in the film. When Lacey finds her husband Daniel (Josh Hamilton) missing from their bed in the middle of the night and finds him standing out in the yard in the dark, she knows something wrong. When he is unresponsive, she takes a closer look and that’s when things get even more interesting.

Now, I believe that this fourth clip is showcasing how we will be getting all of our information in the film – from Edwin Pollard (J.K. Simmons), a man who somehow has knowledge of this situation. As he begins to explain all of their symptoms and strange scenarios that have befallen them, they learn that there have been others which this has happened to. Although it’s cut off here, in the full theatrical trailer he goes on to say that your fate is inescapable and eventually when they are ready, they will come for your family.

The final clip takes place later in the film as Daniel is awake at night staring into what I assume are security cameras he had installed because of everything going on with his family. When the one in his son Sam’s (Kadan Rockett) room begins to malfunction, he fears the worst. His fears are relieved when he sees his son sleeping peacefully in bed, but all is not what it seems. This may be the most disconcerting of all these clips because it involves one of the children. Although I am assuming that Daniel is just imagining it all, I could be wrong.

While none of these clips are jump-from-your seat scary, they are all very suspenseful and fill me with questions. I am intrigued by the movie and am looking forward to watching it in theaters upon its release. I am a fan of many of the cast members and I think if done right, “Dark Skies” could be a hit.

So what do you think? Is this a movie you might want to check out in theaters, wait for DVD or skip altogether? Leave a comment and let us know.