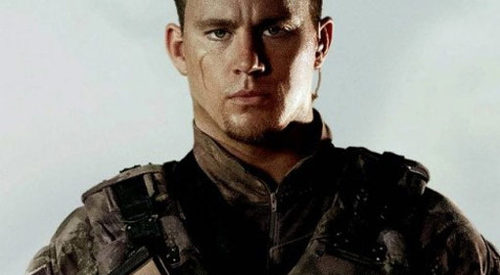 Audiences were less than thrilled when “G.I. Joe: Retaliation” was pulled from its June 29 release date of this year and sent to March 29, 2013. The reason the studio gave was that they decided to convert the film into 3D to help in the overseas market, but industry insiders knew the true reason.

Audiences that were treated to a showing of the film rated the movie poorly — in part due to story loopholes and also because the movie had Channing Tatum’s character, Duke, killed off in one of the opening scenes. So the studio pushed the release date, hired a post-3D conversion company and then did a series of re-shoots to add more Tatum into the story.

Reportedly, one of the aspects of the early cuts that audiences liked most was the chemistry and dynamic between Tatum’s character and Dwayne Johnson’s new lead character, Roadblock. The re-shoots were also planned to add more scenes between the two men in which they could play off each other.

After that disappointment, and nothing new for months, we now have a new trailer in which we get a few new scenes with Channing Tatum and Dwayne Johnson. Plus, we also get some new dialogue from Bruce Willis as Joe Colton, the original G.I. Joe.

Take a look at the synopsis for the film and the check out the movie’s brand new trailer;

“G.I. Joe: The Rise of Cobra” ended with the maniacal Zartan impersonating the president and taking over his position in the White House. Now this imposter has order the annihilation of the G.I. Joe’s in order to move forward with his plan to use the ultimate weapon and have every country on Earth at his mercy. With the majority of the Joe’s killed in the strike against them the remaining soldiers must work to fight their ultimate enemy Cobra while also trying to uncover the threats to them within the United States Government. How do you fight the government in which you are trying to also vindicate yourselves and clear your names? Their toughest battles lie ahead as they journey will take them around the globe and test them more than they have ever been tested before.

While I will say that this new trailer does have a better look and feel to it than the previous trailer did, I’m not sure how much a 3D surcharge and a bit more Channing Tatum is going to help ticket sales enough to offset the cost of an entirely new marketing plan along with the added charges caused due to re-shoots.

I’m hoping that by having a new director, Jon M. Chu (“Step Up 3D” and “Justin Bieber: Never Say Never”), along with subtracting some of the more comedic characters from the first film, will help the sequel achieve a different, more adult tone than we saw in the previous film.

So did you see “G.I. Joe: The Rise of Cobra” and are you looking forward to this sequel? Leave a comment and let us know.