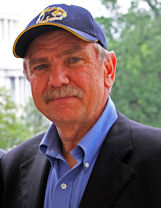 In “Discovering James Blue” (2014), created by students and supervised by Daniel Miller, filmmaker and professor at the University of Oregon, Blue is shown in teacher-mode with a bookcase lined up with video cassettes. He says, “Now what I thought … that if we could probe through all of this material, finding the pieces, and putting them together somehow … I’ll show you what I mean.” He grabs a video and slips it into a VCR. “Since here’s a piece of raw material from one of the cassettes…”

Both Blue and Miller have been experts in the Immersion Discovery Method, setting the bar on how to teach filmmaking.

In a case of parallel worlds, both Blue and filmmaker, Daniel Miller, who chronicles Blue’s life in “Citizen Blue,” graduated from the University of Oregon, became instructors of cinema and have created important documentaries on social justice issues. Incidentally, they both were present at pivotal moments in history. Blue witnessed the eve of the Algerian Revolution and the 1963 Civil Rights March. Miller was present at Kent State during the 1970 student shootings by the National Guard and has been a continued activist in the civil rights and anti-war movements.

In an interview, Miller explained why he titled his latest bio-doc “Citizen Blue.”

“James Blue’s defining characteristic for me and many others was his great humanity,” the film-maker said. “When faced with the opportunity to make Hollywood big budget films, he bridled at the corporate control and lack of independence in Hollywood. To actualize his humanity and art he struck a blow for independent films by arguing for and voting in support of the NEA institution of funding for regional independent filmmaking centers (like the NW Film Center) throughout the nation—over simply funneling NEA monies to Hollywood-supported projects.”

IJM: How has this project influenced your own filmmaking and teaching?
Miller: The project is another of many projects exploring these similar themes in my teaching and filmmaking. I was forged at Kent State University during the Civil and Anti-War movements and also in the extraordinary cinema and art programs there in the 1960s. It was a time of great exploration and advancement in film and social justice throughout the world.

Watching and studying James’s work and interviews and teaching syllabi, etc. is a lesson in everything that is important to me. My film production teaching also always emphasizes and seeks out projects that will transform students. An example of that is the fact that the origin of this film was a short 10-minute film project my students participated in making. They are all changed from this experience.

To me, James Blue made good decisions motivated by intellectual curiosity and a fire for learning as well as an empathy for human beings and the betterment of the human condition. It’s not bad to learn that those choices lead one forward and leave a record for others to study and perhaps learn from.

IJM: What made Blue a great filmmaker?
Miller: James could have continued after his work on “Hawaii” (1966) as a major Hollywood director. Instead, he went to Houston, Texas and provided cameras to the people and a bridge for young filmmakers and social justice advocates. “Who Killed the Fourth Ward” (1977) changed and transformed people, I think, and in the process tells a story that is as relevant today as it was then and allows those living it to tell it. What was the reward in that for James? Well, he democratized and in some ways revolutionized the media. He also made a difference in the lives of the students going to the Fourth Ward with him to do it.

IJM: The film describes Blue as a charismatic teacher. He seems to have used the discovery method – giving students films, info, and projects from which to come up with their own ideas. Right?
Miller: Colin Young, amongst the greatest cinema studies and production teachers in history at UCLA and at the National Film School and the French equivalent who knew and loved and hired James to teach said something like that. Something about allowing students to make mistakes and fail and triumph and collaboratively engage in this process. And they did. And they forged their identities and souls often as well as their art in the process I believe. 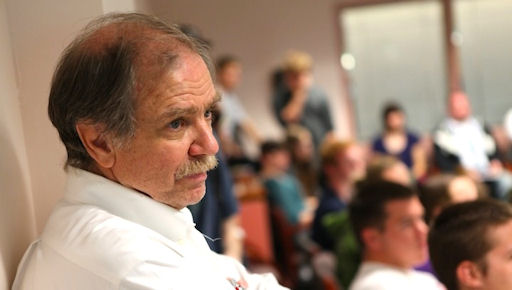 “Citizen Blue” has a one-night-only showing at the Northwest Film Center on Thursday, Oct. 19, at 7 p.m. Dr. Miller will be present for a discussion along with Blue’s brother, Richard Blue, and others discussing James Blue’s legacy.