There is nothing more difficult to make than a great biopic, and the more powerful the subject the more difficult the film. Choosing to somehow pay homage to Vincent van Gogh was an awe-inspiring task. The resultant work is as beautiful and heartfelt as the work of the artist himself. Tragic, but with a heart of gold, this screenplay is as vibrant, chaotic and full of movement as any of his works. 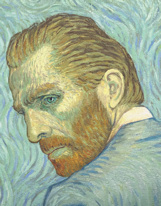 Writer/directors Dorota Kobiela and Hugh Welchman (with additional writing by Jacek Dehnel) must have struggled to find a voice suitable to the task. They chose an absurd solution, 65,000 hand painted frames, each one contributing its own part to the whole. Stationary objects are not completely stationary. They shimmer with life, radiating an unstable shakiness that brings the viewer directly into the thought process of genius. To watch this movie is to walk a tightrope of sanity, with each measured narration threatening to be the straw that broke the camel’s back.

The story itself treats the artist’s life by investigating his death. A close friend’s son, Armand (perfectly voiced by Douglas Booth) narrates the screenplay. He moves to the place of van Gogh’s death to determine the possibility of murder. Although the official determination was suicide, the circumstances offer plenty of room for speculation. Although there is mystery, the uncovering of the life of the man is the goal of the screenplay, not the manner of his death.

Requiring a brigade of 125 specially trained painters, the meticulous research is as obvious as the obsessive art work. Eight hundred personal letters weave a tapestry impossible to comprehend but at the same time coupling with unconscious concepts that cannot be expressed in words. The screenplay does not dictate the thoughts of the audience but inspires the audience to gain at least a fragment of the tortured genius of the subject.

People drove him crazy and the radical presentation threatens to do the same to the viewer. Color sequences vibrate back and forth with black and white. The former telling the story and the latter reflecting memories and suppositions. Just as the memory is imperfect, the only meaningful tale of the artist is told by his extant work. The narrator struggles not only with uncovering the truth but plumbing the meaning of truth itself.

If he was physically killed by an assailant, his work was assaulted daily by nearly everyone. In a moment of the driest humor, the artist Paul Gauguin is blamed for making him crazy. That must have been quite a feat considering Vincent sold only one painting in his lifetime. Apparently, there was enough craziness to go around.

If you have ever dared to wish to be famous, this movie will move you to second thoughts. It is not so much a decision as it is an accident accompanied by a series of unsuccessful attempts to be normal. “Loving Vincent” is a remarkable work that is not so much a story as an experience. 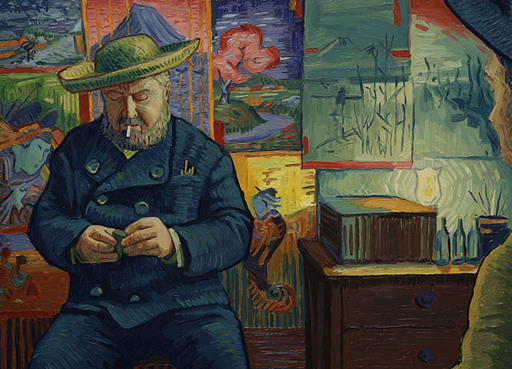