Jaws Blu-ray Has a Release Date 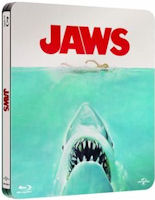 One of the most influential motion pictures of all time is coming out of the water and onto your television screens once again, only this time in high definition. Steven Spielberg’s Academy Award nominated 1975 classic “Jaws

” is set to arrive on Blu-ray with fully restored and digitally re-mastered picture and sound on Aug. 14. The Blu-ray will be stuffed full of special bonus features — over 4 hours worth.

” still is scaring people out of the water over 35 years later, and the attention to detail shown during the restoration — seen in the behind the scenes video below — is astounding. “Jaws

” remains one of the highest-grossing films in motion-picture history and is largely considered the film that launched the summer blockbuster.

” is one of 13 classic Universal films being digitally re-mastered and fully restored from 35mm original film elements as part of Universal’s ongoing 100th Anniversary celebration. The Jaws restoration began with researching and evaluating the existing film elements to determine the best means to restore the film. Over the course of several months, skilled technicians worked to remove and erase all traces of dirt and scratches frame by frame of the film. They also had to transform the classic sound tracks and award-winning score to a DTS HD Master 7.1 for the highest quality surround sound.

Craig Kornblau, president of Universal Studios Home Entertainment, said of the restoration, “Jaws holds a unique place, not just in Universal Pictures’ history, but in global pop culture, and it is only fitting that this phenomenal film should be given the extensive restoration needed to ensure that long-time fans as well as newcomers can enjoy this unforgettable cinematic achievement for generations to come.”

Here are some of the specs that will be included in the new release of the Film on Blu-Ray and Combo Pack including DVD, Digital Copy and Ultraviolet Copy. 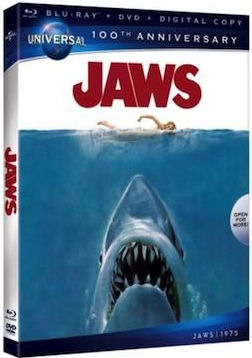 Is this film worthy of being added to your Blu-ray collection? Leave a comment and let us know what you think about classic films like “Jaws” making a leap onto Blu-ray.

And click HERE to read more of our past coverage of “Jaws,” including a special series highlighting the film’s 35th anniversary in 2010.