Jem and the Holograms: Official Trailer

One of the most important things to me when looking at a film is the music. Of course, the cast and crew are the first things I look at and are what ultimately decide my excitement factor for a film, but the music is a vital piece of that puzzle. 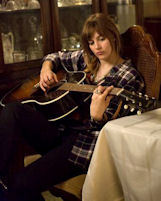 A solid soundtrack can heighten my experience of a film and really push my opinion of the film up a notch, purely because a great soundtrack adds to the experience on an emotional level as well as a fun and interactive level. What I may perceive as a poor soundtrack, can really alter my perception of a movie in a negative way. When I caught wind of a new film, “Jem and the Holograms,” I immediately looked at the trailer, and because it is a film where music is detrimental to the plot, I paid close attention to the music tracks. And I can safely say, I am not excited about this project, my apologies.

“Jem and the Holograms” tells the story of a small town girl who rises to stardom after a video of her singing a song she wrote is uploaded to the internet. This is one of those plots that we have seen in the masses several times. How does fame affect you once you chase after it and actually catch it? The ugly side of Hollywood and fame is revealed, that’s what happens.

Not negating the hard work of any cast or crew members involved in the film, I appreciate what people do to bring a movie to fruition. Perhaps “Jem and the Holograms” quite simply isn’t my cup of tea. If the plot was lackluster, but the music was engaging and interesting, that would be one thing, but in my opinion, the plot is lacking and the music is not something that piques my interest. There are only a few songs in the trailer, however not a single one hooked me in. Conversely, if the soundtrack was mediocre but the plot really spoke to some part of me I could get on board. Neither of these scenarios are true, and I am rightfully not allured.

The cast of “Jem and the Holograms” really is a great ensemble. You have Molly Ringwald (“The Breakfast Club”), Ryan Guzman (“The Boy Next Door”), Aubrey Peeples (“Nashville”) and one of my absolute favorites, Juliette Lewis (“August Osage County”). This is a stellar cast. Ringwald is iconic for “The Breakfast Club” fans, Ryan Guzman is hot off of Jennifer Lopez and “The Boy Next Door, Aubrey Peeples is doing well for herself on “Nashville” and Juliette Lewis is not only a great actress, but a musician as well. On paper, this works for “Jem and the Holograms.” I can only judge by the trailer, and I will say this, the performances are not bad. The performance quality seems high as I would expect from names such as these.

One thing that really irked me about the trailer for “Jem and the Holograms,” though, is the fact that “Pitch Perfect” is used as a corny enticer. Little things like that slightly raise my irritation level. It says to me that the people in charge of marketing are not confident enough in the film to let it stand alone and speak for itself, they feel the need to plug a widely successful film with a cult following to blindly view a film for no other reason than the words “Pitch Perfect.” I may be a little out of line here, and it really isn’t that big of a deal, it’s just one of my observations.

Will I be seeing “Jem and the Holograms?” I think it’s safe to say that as of now, based on the trailer that I saw, no I have no intention of doing so.

The film is scheduled for an Oct. 23 release, so what I will do is casually follow the marketing for the film. There may very well be a trailer that gets released in the future that shows me a different perspective of the film and perhaps includes a song or two that I actually connect with. If that is the case, then my ever changing and adapting opinion will follow along.