Russell Crowe comes out swinging with his narrative fiction feature directorial debut but fouls out as this war story drops off the deep end into the irretrievably maudlin. Screenwriters Andrew Knight and Andrew Anastasios are partly to blame, but Crowe should have known better. 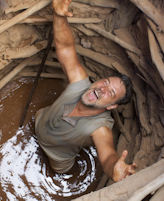 The setting is Australia circa 1915, on the eve of the dreadful battle of Gallipoli. Russell Crowe plays Connor, a hardworking man of the earth, divining a living out of the parched and unforgiving Australian outback. He lives with his three sons who, like Connor, are the salt of the earth, and his wife Eliza (Jacqueline McKenzie) who is dedicated to her husband and sons. World War I is beginning “outside” and the boys are enthralled with the romance, adventure and heroism of war. Like hundreds of thousands of others at Gallipoli, and millions through the war, they are mowed down by the modern machine gun.

The film opens four years later as Eliza has been driven insane by grief and Connor is forced to confront his own helplessness and decide what he must do to bring closure to his loss. He sets out to find the remains of his sons in the mass graves that were once the battlefields of Gallipoli.

The story is told by a powerful series of flashbacks that intersperse Connor’s story with that of the horrible battle that cost him his sons. The saint like patience, and nearly god-like prescience, of Connor is pockmarked with the mechanized death that awaited the cannon fodder of young men who were ordered to charge machine guns without cover. When he arrives at the battlefield, already beating all odds in a nation permanently embittered by war, he meets obstacles that only a Greek hero could overcome.

Unfortunately, the farther along the film goes, the more maudlin it becomes, partially because of the music. The exposition would have been much more powerful without the overbearing soundtrack. This is not the fault of veteran, Oscar nominated David Hirschfelder. There is simply too much background music in too many places where the film footage itself should have been left to tell the story. Sometimes the power of deathly silence does not benefit from a tidal wave of tearful strings.

Aggravating this are excessive tearful scenes between Connor and the strikingly beautiful war widow Ayshe, further clubbing the audience into understanding the horrific consequences of this last gasp of British colonialism and the entry of mechanized death into the science of organized killing.

“The Water Diviner” features great supporting performances by Jai Courtney as Lt-Col Cyril Hughes, the ranking military commander of the remote burial project, Yilmaz Erdogan as Major Hasan, his Ottoman counterpart, and Olga Kurylenko as Ayshe, in addition to thoroughly excellent cinematography by Oscar-winning Andrew Lesnie (“The Lord of the Rings” series).

This is a good film and one that deserves watching, although Peter Weir’s 1981 “Gallipoli” tells the story in a more skillful (if fictionalized) manner. 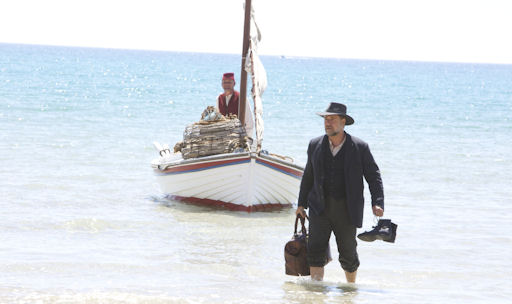