Review: About Elly (aka Darbareye Elly)

In the midst of a jocular college reunion, the young, beautiful and mysterious guest Elly (Taraneh Alidousti) disappears without a trace. In the wake of her disappearance, her true story emerges to the shame and humiliation of all concerned. 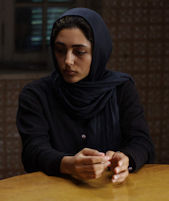 The setting is the shore of the Caspian sea, where three couples, their three children and the unmarried Elly and her blind date — the recently-divorced Ahmad — have traveled for a carefree weekend. As the group arrives laughing and singing, in their BMW, we know this bunch is having far too much fun.

Sepideh (Golshifteh Farahani) has invited Elly, who is their child’s school teacher. This innocent match-making must be covered up with a lie early in the story; the group explains to the woman renting out the beach cottage that Elly and Ahmad are actually newlyweds. As it turns out, their reservation has been lost and group ends up in a dirty, collapsing ruin of a house on the beach. The descent has begun, as the noise of the crashing of the Caspian waves relentlessly creeps through the broken windows.

This film is compared to Michelangelo Antonioni’s “L’Avventura,” which also involves a woman’s disappearance that leads to guilty skullduggery. Perhaps a better reference would be a story with the tone of Peter Weir’s “Picnic at Hanging Rock” and the introduction of Eli Roth’s “Cabin Fever.” The problem is that the Eli Roth intro is much too long and Peter Weir backstretch is much too short. Plus, the film, overall, lacks the percussive, threatening soundtrack that is a big part in making “Picnic” the terrifying ordeal it is.

Written and directed by Asghar Farhadi, this is his fourth film, following immediately on the heels of his smash success “A Separation.” Farhadi, who won the Berlin Silver Bear for Best Director for the film, co-wrote the original story with Azad Jafarian. In place of a musical or percussive soundtrack, the waves of the Caspian form the background as the events unfold. The unceasing waves, contrasted with the playing children, form an eerie background to the dissemblance of the truth which takes over the hearts and souls of the seven adults accompanying Elly.

As the lies multiply and reverberate through the group, a final unfortunate victim arrives just in time to take part in the final horrific outcome of deceit. As Farhadi peels back the layers of subterfuge like Hitchcock, the story emerges like a skin-eating fungus. When the police come to investigate, it turns out that nobody, not even Sepideh, knows Elly’s last name. Floating from scene to scene, she appears as much a nun in her habit, or a ghost, as a Muslim woman. Too much of her is covered, as if she is in another world. The decrepit beach house is her mausoleum and her hosts her mourners.

In the end, the only people telling the truth are the children and they know very little. In the closing scene of the film, the BMW is trapped up to the wheel wells in the sand as the group frantically pushes and shoves and the tide of the Caspian slowly licks at the rear bumper.

This is a sincere film but, in the end, one that lacks the plot to fill the run time.