Trailers crowned with an R rating are all the rage with movie goers these days. One such trailer, “Machete,” made its appearance in the exploitation double feature “Grindhouse” as a mock trailer for a fake film. It was an instant fan favorite, so much so, that director Robert Rodriguez went forward in bringing the mock trailer to life.

“Machete” came to the big screen causing quite a ruckus on its way. Specific trailers targeted the state of Arizona in response to SB 1070, which many felt condoned racial profiling and prejudice. No matter which side of the fence you fell on, “Machete” got your attention.

I am not a huge fan of sequels, but in some instances I demand them and “Machete” is one of those cases, and I’m not the only one. Fans of Rodriguez and the character of Machete have all voiced their angst for the sequel, “Machete Kills” and it’s coming to us in 2013.

One of the surprise cameos that Rodriguez announced via his Twitter is Lady Gaga. La Chameleon is the character that the pop supernova will be portraying and as of now, her character poster is being mass marketed for the film. I don’t know much about this character but judging solely on the name, it is ingenious. Lady Gaga is theatrical, she can blend in — she is the chameleon of the pop industry.

Once I let the news marinate in my brain, I stewed on the fact that the official credits for La Chameleon belong to Lady Gaga, and not Stefani Germanotta, which is her given name. Fergie had a role in “Planet Terror,” another Rodriguez film, but the credits went to Stacy Ferguson, her given name. I can only imagine it is a marketing strategy to publicize Lady Gaga’s stage name versus her legal name. Gaga insists that there is no difference between the Lady Gaga who has taken the music industry by both surprise and storm, and Stefani. People constantly ask her what is the real Stefani like and she maintains that Lady Gaga is simply a nick name and she has nothing to hide or prove based on a name.

I imagine there are skeptics out there who won’t take Gaga seriously as an actress. Whether or not you are a “Little Monster” or of the breed that finds her odd and you don’t “get” her, the facts are this: she went to Tisch School of the Arts, one of the nation’s leading school for dramatic arts, and I imagine that her part will be quite small. Gaga is currently on tour and the tweet that Rodriguez sent out was sent the day they wrapped Gaga’s portion. I can’t imagine her doing a lengthy role given time constraints. Rodriguez is notorious for filling his flicks with cameo slots and I perceive Lady Gaga to be just that, a cameo.

On a personal and somewhat biased note, I can’t wait to see what she does with La Chameleon regardless of how big or small the part is. Cuba Gooding Jr. is cast as El Camaleon, so I have reason to believe that he is the complementary character to Gaga’s. Not a pair that I would think of off the bat, which makes it quite intriguing. Some may think that Gaga is too theatrical, but I think she may surprise fans and non-fans alike. There are just too many singers-gone-actors that should have stayed singers and it’s definitely a fear as a fan. It’s not easy to excel in both music as well as film. My hopes are super high for not only Lady Gaga but for “Machete Kills” in general. I can’t wait to see what or who “Machete Kills.” 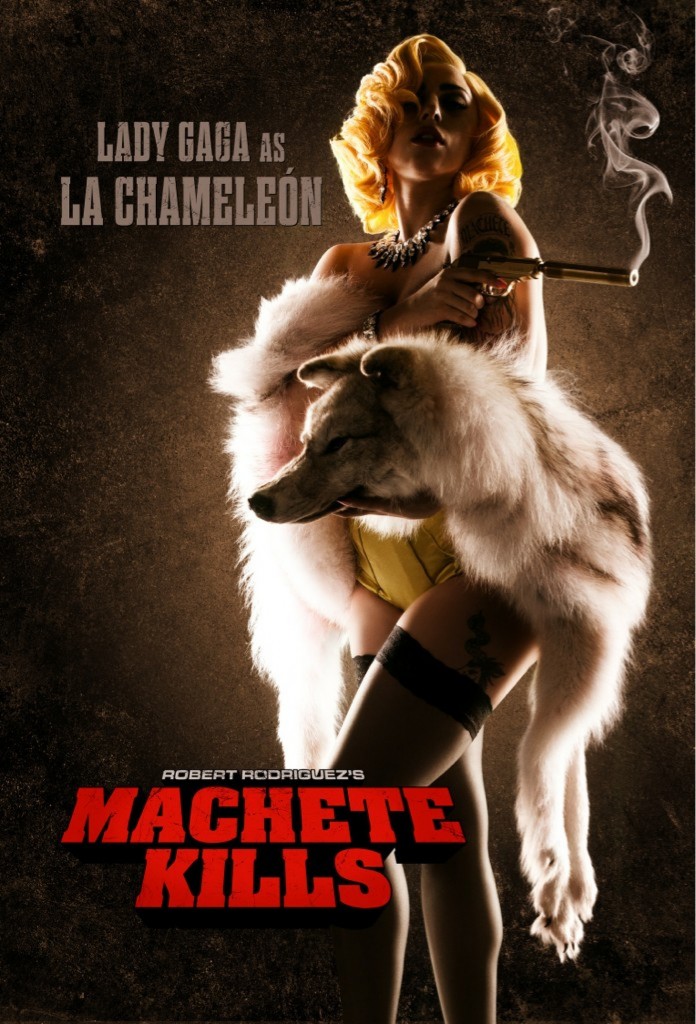