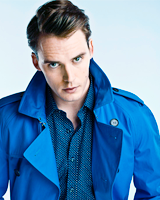 After months of speculation on who will play the fan favorite Finnick Odair, news has finally broken and Lionsgate has officially announced that Sam Claflin has signed on to join Jennifer Lawrence and Josh Hutcherson in “The Hunger Games” sequel “The Hunger Games: Catching Fire.”

Claflin is best known for his roles in “Snow White and the Huntsman” and “Pirates of the Caribbean: On Stranger Tides,” but this franchise just might bring him into the limelight. He will be a secondary character, but he is a secondary character who plays a large role in the advancement of the story itself.

Claflin doesn’t have much experience on the big screen, but perhaps “Catching Fire” will prove him to be worth watching. After all, Finnick does make it into the third book of the series and Lionsgate has already announced the final movie will in fact be two separate films. We’ll just have to wait and see when “Catching Fire” hits theaters in November 2013.

Sam Claflin joins most recent additions to the film Meta Golding as Enobaria, Alan Ritchson as Gloss, Stephanie Leigh Schlund as Cashmere, Maria Howell as Seeder, Bruno Gunn as Brutus and E. Roger Mitchell as Chaff. However, the rumors for Tony Shalhoub currently circulating as being cast as Beetee have not been confirmed.

Meta Golding will be playing the ferocious District 2 victor Enobaria, who won her games by biting her opponent’s neck and afterwards sharpened her teeth into points inlaid with gold. I’m interested to see how her teeth will be done though. Golding does have a few films in the works at the moment, but is best known for her television roles on “CSI,” “House” and “Criminal Minds.”

Alan Ritchson is Gloss, a former career tribute from District 1. He is competing in the Quarter Quell with his sister Cashmere (played by Stephanie Leigh Schlund), who won her games in a consecutive year as her brother. Most may recognize Ritchson from his roles on “Blue Mountain State” or “90210” or (perhaps most memorably) as Aquaman on “Smallville.” While, Schlund is best known for her small role in “The Last Song” and the pilot episode of “Drop Dead Diva,” she will be appear this fall in Fox’s new series “The Following” alongside Kevin Bacon.

Maria Howell hails from Atlanta, Ga., so filming in the area will be nothing new to her, but she landed the part of Seeder, a tribute from District 11 whom Katniss immediately takes a liking to, as Seeder gives Katniss vital information regarding Rue’s family. In the meantime, keep an eye out for Howell on NBC’s fall series “Revolution.”

Bruno Gunn has been cast as District 2’s victor Brutus, who becomes one of the key competitors in the Quarter Quell. Gunn has appeared in various television shows with the likes of “NCIS: Los Angeles,” “Prison Break” and “Sons of Anarchy,” with roles that tend to have the title Officer, Police or Guard in it. Gunn definitely has a menacing look about him.

E. Roger Mitchell will take on Chaff, the second victor from District 11. Chaff lost his hand during the 45th Hunger Games and refused to let Capitol doctors give him a prosthetic one to replace what he lost. He teams up with the rag tag group to help Katniss in the Quarter Quell. Mitchell is best known for his role on “The Shield” as Lester Hoffman, but he has also appeared in films such as “Contagion” and “Battle Los Angeles” and will soon appear alongside Denzel Washington in “Flight.”

As more casting decisions are announced, we’ll keep you posted. What do you think of the choices made so far?