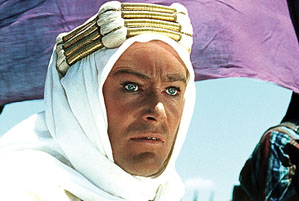 The 4K restoration of the film was completed last year by Sony Pictures Entertainment under the direction of Grover Crisp, EVP of Asset Management, Film Restoration and Digital Mastering for SPE. Crisp also received a special, individual award for “Outstanding Achievement in the Field of Film Restoration and Preservation.”

The FOCAL Awards honor producers, filmmakers and other creative professionals who have used library footage in a documentary, feature film or any other form of production, as well as those with the skills to restore and preserve it.

Nominated for 10 Academy Awards and winning seven, including Best Picture and Best Director and staring Best Actor nominee Peter O’Toole and Best Supporting Actor nominee Omar Sharif, “Lawrence of Arabia” is one of the crown jewels in the legacy of Sony Pictures’ Columbia Pictures label.

For the new restoration, the original camera negative was scanned at 8K and the film went through a painstaking process of repairing problems inherent to the 50-year old film elements. Using the latest digital imaging technology, the color grading and re-mastering was completed in 4K at Colorworks, Sony Pictures Entertainments’ digital intermediate facility.

“We wanted to return this film to as pristine a condition as possible to honor its anniversary release,” said Crisp. “The original negative was seriously damaged in a number of ways, some problems dating from the original release and some accumulated over the years. But, until now, we did not have the tools available to address these issues. We think fans of the film will be as amazed as we are at the detail and resolution in the imagery captured by cinematographer Freddie Young to complement David Lean’s immaculate direction.”