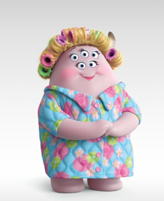 Just in time for Mother’s Day, here’s a cute promotional clip from the “Monsters University” gang. The spot not only has new footage, it also features a brand new character we haven’t seen before named Mrs. Squibbles, voiced by Julia Sweeney.

Mom to Squishy (Peter Sohn), the doting parent is seen doing what mothers do — fuss about their loved ones. Complete with a hilarious house coat of multi-colors and rollers in her hair, the lovable Mrs. Squibbles is seen giving sage advice and support. Playing in the dark could ruin your eyes. Seatbelts save. Nothing beats being cheered on by your own mother during a game and most importantly, don’t forget to smile.

For those out of the loop, “Monsters University” is the prequel to “Monsters Inc.” In the prequel, we see when Mike (Billy Crystal) and Sulley (John Goodman) meet, which was in college. However, in the original “Monsters Inc.,” Mike stated they’ve known each other since the 4th grade. That’s just a minor detail.

For the official synopsis, keep reading below:

Ever since college-bound Mike Wazowski (voice of Billy Crystal) was a little monster, he has dreamed of becoming a Scarer — and he knows better than anyone that the best Scarers come from Monsters University (MU). But during his first semester at MU, Mike’s plans are derailed when he crosses paths with hotshot James P. Sullivan, “Sulley” (voice of John Goodman), a natural-born Scarer. The pair’s out-of-control competitive spirit gets them both kicked out of the University’s elite Scare Program. To make matters worse, they realize they will have to work together, along with an odd bunch of misfit monsters, if they ever hope to make things right.

“Monsters University” — which also features the voices of Nathan Fillion, Steve Buscemi, John Krasinksi, Helen Mirren, Charlie Day, Aubrey Plaza and Alfred Molina, — opens in theaters June 21 (you can see the trailer here). The film arrives a little late for a Mother’s Day gift, but hey, it’s only a week after Father’s Day.