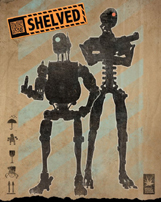 Some of the biggest names in the entertainment industry have gotten their filmmaking careers started by creating intriguing short films to showcase their style to the world. Media Design School in Auckland, New Zealand, is becoming well known for training students who often move into the entertainment and special effects industry and work on some of the biggest movie blockbusters.

Winning awards and showcasing their work at film festivals around the world, the students at the school have done it again with an expertly crafted comedic short film “Shelved.” Running at just over five and a half minutes “Shelved” tells the story of two factory robots Beano (Stephen Papps) and Craig (Simon McKinney) who hate their jobs, that is until they hear they might be replaced by humans.

This short blends the comedic style of classic slacker films such as “Clerks” and “Dazed and Confused” with some top-notch animation. What’s most impressive is how it fuses so seamlessly the live footage with the animation and that is a testament to the talents of all those involved.

Directed by James Cunningham, “Shelved” had 11 students take 12 weeks of production, which included 5,460 hours of rendering and 6,300 hours of work to complete the short film. Even Weta Workshop’s senior concept artist Greg Broadmore (“Lord of the Rings,” “District 9”) helped the students by providing the original concept sketches for the robots. Needless to say, a ton of hard work and dedicated individuals slaved over this short film, which has a “Wall-E” feel to it while also being a comical take on a popular series of films. It also provides a light political and social commentary on workplace redundancies even in a recession era.

I could personally watch a full length feature of this type of movie. I enjoyed the witty banter back and forth and even though I am not quite familiar with the actors voicing the characters, I still thoroughly enjoyed the performances. Besides our robot leads, we also get some voice work from Penny Ashton and Peter Rawley, as well as an onscreen performance from Lara Fischel-Chisholm in human form.

Written by Kathryn Burnett, “Shelved” is a funny — and fun to watch — short film that takes a genre we all know and love and pays tribute to it while also being very entertaining. I bet directors like Kevin Smith and Richard Linklater would be proud to have created a short like this early on in their careers and from what I see, many of these students will have long careers in the entertainment industry.

What do you think of “Shelved”? Leave a comment and let us know.