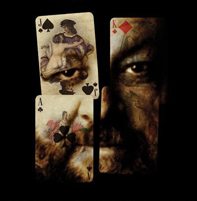 A stocky man tears up a piece of paper into tiny little pieces that flake to the ground. Then a little white butterfly flutters out of his hand. He picks up a slick deck of cards and fans them out in patterns. After shuffling a half dozen times he picks up the Ace of spades – or an audience member’s chosen card.

What’s cool about this bio-doc is the tricky sleight of hand Ricky Jay gracefully conjures for his audiences. What’s also interesting is that the same gamesmanship he presents in his magical practice is also present in the promise of this film. It purports to reveal the mysteries and mentors of Ricky Jay. But are we tricked?

Ricky Jay began performing magic at age four. At age 65, he relaxes by shuffling cards in a variety of smooth techniques for hours at a time. He is a man who dedicated himself to the pursuit of magic. He sought control and perfection, training in Akido to sharpen his speed and focus.

However, mysteries still surround Mr. Jay. In 88 minutes of footage, he’s not going to reveal how he does his illusions and he’s not going to reveal much about himself. Yes, he left home during high school, stating that he would never see his parents again. He didn’t marry until seven years ago, at around age 58. He’s kept his same agent for about 30 years. That’s pretty much all we’re told about the mysteries of Mr. Jay, whose real name is Richard Jay Potash.

Although Jay is a world-renowned magician, author, historian and actor, what is he really like?

How did his parents affect him? Did he detach from his entire family? Why? What does he think about? What is his world view? Is he happy? What does he care about? Is he involved in activities beyond himself? What is his political perspective? Has he affected charities or service beyond his world of entertainment?

The depth of the man is missing, but the manipulation of the cards, and the audience, are subtle and spellbinding. Steve Martin is fooled in a TV presentation and David Mamet is mesmerized to the point of having Mr. Jay appear in several of his films.

“Deceptive Practice,” narrated by Dick Cavett, was featured at the 2012 New York Film Festival. It features Ricky Jay at his best, promoting his craft and his talent. The trick of this movie is that the next time you see him billed you won’t be able to help yourself. You will be buying a ticket.

“Deceptive Practice” will open at the Nuart in Los Angeles on May 17. See the film website listed below for showings in a variety of US cities.