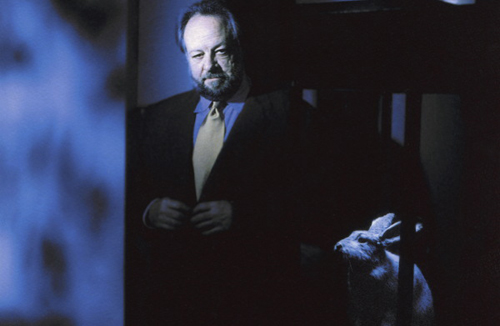 The other kind of magic is close-up magic. This is old school vaudeville with few or no props, no glamour model assistants and magicians who are so inherently anti-glamorous, and downright anti-social that the promoters are happy to get anybody to walk in the door at all, let alone pay money. These magicians usually had childhoods of painful shyness, family dysfunction and social ineptitude that led them to become near-hermits as adults.

In the film “Deceptive Practice: the Mysteries and Mentors of Ricky Jay,” RJ (Richard Jay Potash — born 1948) describes how a deck of cards is a world in itself, how the deck becomes one’s best friend, a place of refuge, a place where private achievements trump all of the degradation and humiliation of the real world, you know you are hearing from an actor of a different stripe. This is old school magic, the tricksters, hustlers, street artists and downright con-men who gave vaudeville the reputation it deserved. It was down, dirty, funny and unabashedly crazy. You laughed, cried, stared and yelled, and you always checked for your wallet before you left the room. If it was not already too late. 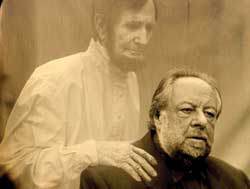 The legends of old-school magic, Al Flosso, Slydini and Cardini were amongst the earliest practitioners of RJ’s modern illusions.

Al Flosso (born Albert Levinson, 1895 to 1976) — aka “The Coney Island Fakir” — was a New York Jew who perfected the “Misers Dream” illusion. He stood on the Coney Island boardwalk and hustled for change whole producing an endless stream of coins, seemingly from thin air, which formed a waterfall of money into his bucket. As each landed with a metallic clang, one after the other, no one in the crowd thought to wonder why he was passing the hat if he could produce unlimited coinage. When he passed, a big piece of Vaudeville passed with him.

Slydini (Tony Slydini, 1900 to 1991) was born in Italy, and starting at an early age he was fascinated about how timing and misdirection could cause the human senses to betray. More than most early practitioners, he dedicated himself to exploring the relationship between the magician and his audience and developing this intimacy into crack close-up magic. Dai Vernon (one of the two direct mentors of Ricky Jay) said, throughout his entire career, that Slydini was the only man who could fool him.

RJ’s non-magic card-throwing antics, the bald nonsense of throwing cards into a watermelon, are influenced by Slydini’s patter. Into the “thick, pachydermatous outer melon layer” of “the most prodigious of household fruits.” The inexplicable entertainment of being taken advantage of. The honor of being promised magic and getting fruit.

Cardini (born Richard Valentine Pitchford, 1895 – 1973) formed his magic tricks into skits, often set to music. Coming on like an ordinary Vaudevillian, he would astound the audience by making objects appear and disappear at will. In 1958, the New England Magic Society named him the “greatest exponent of pure sleight of hand the world has ever known.

RJ’s primary mentors, Dai Vernon (born David Frederick Wingfield Verner 1894 to 1992) and Charlie Miller died virtually unknown. Vernon is probably the only man to ever fool Harry Houdini. Houdini boasted that no man could fool him with any trick provided he repeated the trick three times. Vernon placed a deck of cards in front of Houdini, turned over the top card to display it, placed that card under the next top card and then turned up the new top card to reveal it was the same as the first. He repeated the trick seven times in front of the flabbergasted Houdini, who never figured it out. Few people ever heard of him. The book “An Evening With Charlie Miller,” written by Robert Parrish in 1961 is an encyclopedia of card tricks, but few have read it.

The film contains some archival clips of these ghosts of the arc lights, but it is incredibly sad that most of these astounding performers played to small crowds and then were forgotten, replaced by film, special effects and specially staged illusions. It is to the credit of Ricky Jay that he keeps these memories alive.