Three stories of crisis are personified by three eco-warriors fighting for the elements of our global environment: water, earth and air.

The second problem is the devastating Tar Sands development and the proposed Keystone pipeline. Here in northern Canada the determined Erial Deranger, of the Athabasca Chipewyan First Nation, is an indigenous rights activist and spokesperson/coordinator for the environmental impact of the monumental Tar Sands project that leaches toxic chemicals from an area bigger than the state of Florida.

The last story features a learning disabled genius, Jay Harmon, who has invented a device to cool down the planet through manipulating convection currents. The invention is designed to buy us more time to prepare for global warming. 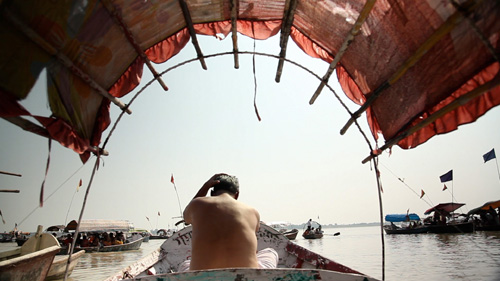 The three stories are interwoven with beautiful skill by Pedro Kos (editor for “Wasteland” and “Island President”) to the gentle experimental music of Emmanuel Vaughan-Lee and Scott Salinas.

All three representatives of environmental preservation are accompanied by eerie, haunting music, bordering sometimes on spiritual. These three crusaders are inspired stewards of the planet, coincidentally joined in what Singh calls a War of Purification.
Deranger warns we are on the brink of “massive ecological, human and cultural destruction.” She does not waver in her commitment as she leads protests and education seminars, however large or small the attending crowd.

Harmon says, “We have to remember that all of our knowledge as human beings comes from nature because we are part of nature. Everything I do is based on this understanding. And this drives me to do everything I can to stop this destruction of the natural world and to reconnect us with nature.”

Connected by an obvious passion, Singh, Deranger and Harmon propel this fine documentary about our impending global crisis, educating and inspiring the viewer to remain vigilant and supportive of the three elements on which life depends.