So far, it’s been an amazing summer. “Fast and the Furious 6” broke a box office record, coming in the fourth highest grossing film for Memorial Day weekend, and “Iron Man 3” is the first solo superhero film to cross $1 billion at the box office. Depending on how the audience takes to them, we can probably expect similar numbers from “Man of Steel” and “Pacific Rim.”

But for those who want a breather from the action and live in Los Angeles, there’s an independent film festival called Dances with Films. The festival, which began May 30 and runs through June 9 at the TCL Chinese 6 Theaters, showcases a variety of work, some with dark themes. “Halfway to Hell” — which will make its film festival debut and world premiere June 9 — is one such film that will be talked about due to its heavy subject matter.

Written by James Brannon, “Halfway to Hell” tackles a tough subject that most people prefer not to acknowledge or talk about. What happens to convicts once paroled from prison? Well, director and producer Richard Friedman attempts to answer that question with this film, through the lives of several men who live in a halfway house for ex-cons. A transvestite, a heroin addict, a gangbanger, a killer, a lifer desperate to go back to prison, a child molester and a dying house manager help to tell this disturbing narrative.

The halfway house is located in a residential area and, of course, this doesn’t sit well with the locals. Spearheaded by a religious zealot, hordes of people gather outside the residence carrying signs and yelling insulting epithets in protest, hoping the harassment will either cause the tenants to move or force the home’s ultimate shutdown.

Their main concern is with a child molester named Frank, who is played to unsettling perfection by Vince Lozano. It is a performance reminiscent of that given by Jackie Earle Haley of “Little Children.” Because we bare witness to Frank’s inner struggle to overcome his illness throughout the drama, we’re somewhat sympathetic toward him. He clearly understands what he did was wrong and wants to change. But his desire to become good doesn’t negate the fact he’s a danger to society. The angry mob outside the halfway house reminds him of this very fact; every moment he steps foot outside the home is without mercy.

I mention Frank first because he so happens to be one of the root causes for the growing tension between the housemates. Another is Emilio, the gangbanger (Lombardo Boyar). He antagonizes everyone and he won’t stop sexually harassing Marilyn (Alexandra Fulton) from the moment she joins the lot. The lifer (Carl Crudup) and manager, Cliff (Tim deZarn), attempt to keep the peace but to no avail.

As tensions continue to grow inside the home, they do on the outside as well. Both the former inmates living at the halfway house and the expanding crowd surrounding the residence transform into rabid wolves out for blood in a short amount of time. I could write more about the alarming film, but I think it best to allow you the viewer to experience “Halfway to Hell” for yourself.

I will say that Lozano, Boyar, Fulton, deZarn , Crudup, Erik Aude and Michael Emery each gave memorable and honest portrayals of their characters. However, for me, the performances by Fulton, Boyar and Lozano are the ones that truly resonate.

Catch “Halfway to Hell” this Sunday and make sure to stick around after the film for a Q&A with the cast and director. Tickets are available HERE. 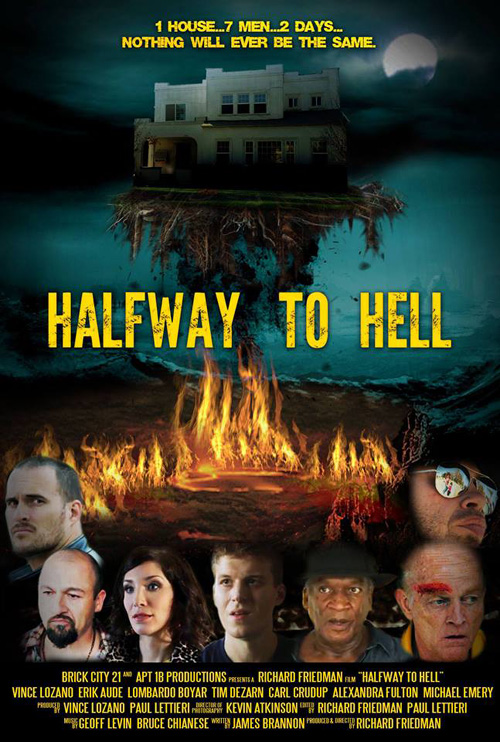