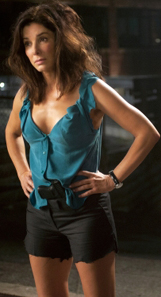 Do you know what really irks me? When you see a trailer for a movie and literally all the funny parts are in the trailer. Lucky for all involved, this is not the case with “The Heat.”

If ever a movie had high expectations from me, it was this one. I am a huge fan of Melissa McCarthy and who doesn’t love Sandy Bullock? I almost did not want to see the movie because there was no way it was going to live up to any standards I had set for it. This is partially true, I will confess, however, I’m really glad I saw the film.

Special Agent Sarah Ashburn (Sandra Bullock) is an uptight member of the FBI who does not play well with … well, anybody. When she is assigned to a very important drug case, she is forced to work with Boston detective Shannon Mullins (Melissa McCarthy), who equally and preferably works alone. What ensues is, of course, comedy. And let me tell you, it was funny.

Granted, it’s not as funny as “Bridesmaids” (also directed by Paul Feig) for sure. That is one of those expectations of mine that was crushed. What wasn’t crushed was my expectation for the chemistry that Bullock and McCarthy could have. Sandy brings her brand of humor and Melissa brings that mouth that only a sailor could appreciate and they really mesh so well together. This is the glue for the movie and it absolutely would not have worked had the chemistry not been perfection.

One assumption many people had, myself included, was that Bullock’s character would basically be the same character she played in “Miss Congeniality.” This is not the case. Both characters have the same job, and that’s about where they stop being connected, I assure you.

The reason the funniest parts were not in the trailer for this film, simple, is the language. I don’t even understand how they cut together a trailer with Melissa in it at all, considering the cussing she does. And thank goodness for that because there were a few scenes that really had the audience in stitches. Even Bullock lets loose a little on the language. 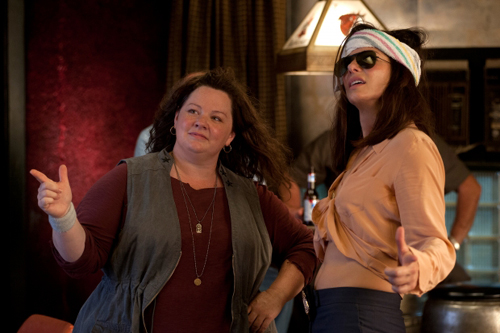 Plot-wise, the film is standard for cop comedies, but the writing is nothing to joke about. It was well written and well executed by the leading ladies. The simplest jokes were laid out in full glory, and one of the funniest moments, for me personally, involved a Boston accent that is so simple, but it was delivered and played incredibly well. Similarly, there was a very long scene in which one portion involved ordinary scotch tape and I thought I was going to pee myself. And I would just like to say kudos to writer Katie Dippold, who did not have to resort to any jokes about weight in the film.

The soundtrack is very fitting with an urban gritty feel. There are definitely some rap tracks, which suits the film’s needs. I got into the music, which is always a huge bonus for me.

All in all, the film is well made, well acted, and, most importantly, funny. The cast was great in its entirety, not just the two stars. Marlon Wayans, Taran Killam, Michael Rapaport and Thomas Wilson are all great in their roles. And, of course, there’s a cameo by McCarthy’s husband, Ben Falcone.

“The Heat” is rated R because it has strong, strong language, but there is no raunchy or overly sex driven themes. I would just like to say, it’s really great to see Sandra Bullock back to her normal quirky self (America still has her back). I recommend seeing the film, just not with the family — definitely adults only.

“The Heat” is a great buddy flick — take your friends, but leave your thoughts of “Bridesmaids” at home. Don’t let that film cloud your head. Look at “The Heat” as its own entity, and trust me, you will laugh. 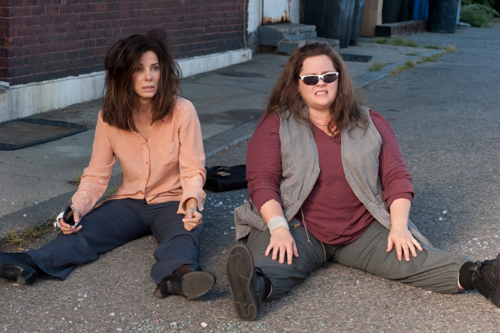 “The Heat” will arrive in theaters starting June 28. You can see the movie’s trailer HERE.