Now You See Me: The First 4 Minutes 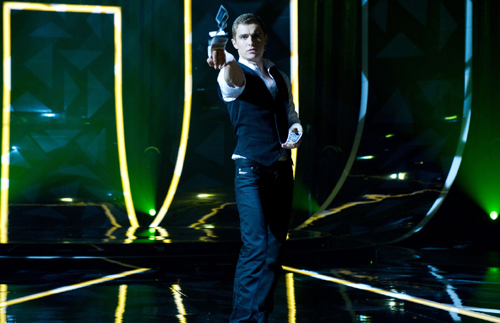 Magic may be abundant in movies and fairy tales, but in the real world we know it’s all an illusion. Illusions, sleight of hand and misdirection are all present in this opening scene for Louis Leterrier’s “Now You See Me,” brought to us by our friends at Fandango.

Coming in at just slightly under four minutes, this opening sequence introduces us to the four world class magicians who are at the center of the story. We see each of their individual styles, locations and even how they do their magic tricks in this quick look at each of their characters.

“Now You See Me” pits the FBI in a thrilling cat-and-mouse chase as they try to track down and trap a super-team of illusionists that call themselves “The Four Horsemen.” The magicians begin to pull off a series of high profile heists against corrupt business leaders during their live performances, typically giving the stolen money to the audience while staying a few steps ahead of the law. These Robin Hoods of magic are renowned for their high-tech shows and daring escapes, but with the FBI and some powerful criminals on their tails who knows how they will get away this time.

So take a look at the opening sequence and let us know if this film intrigues you as much as it does us.

I really like this clip, which shows the diversity of talents among the group, while one uses cards, another does sleight of hand, and then one does an escape trick and, of course, there’s hypnotism as well. There are many questions raised about the film from the trailer (http://itsjustmovies.com/now-you-see-me-new-trailer/), but this opening sequence is just a clean, fun look at the main characters.

One quick note is that when Jesse Eisenberg was doing the magic trick, he actually picked my card, which is either coincidental or just a way the shot was shown to mentally have the audience pick a certain card, but if they do these types of tricks in the film and get the audience watching to participate, that would be incredible and entertaining and just one more reason to see the film.

I am really impressed with the cast making up the Four Horsemen (Eisenberg, Isla Fisher, Dave Franco and Woody Harrelson) along with Mark Ruffalo as the FBI agent in pursuit and supporting roles by Morgan Freeman, Michael Caine, Elias Coteas and Common. All of them have been in movies that I like and, strangely enough, one of the big comparisons people are making to this film is that it looks like Christopher Nolan’s “The Prestige” which also happens to star Michael Caine.

So far everything I have seen has shown this film to be an interesting look at magic tricks and performances and I will say that this film has me intrigued. Whether it will deliver is unclear because it all really relies on the ending of the film and if it will pay off and answer the questions the audience has.

“Now You See Me” hits theaters May 31 and is rated PG-13. Don’t forget to keep an eye out on It’s Just Movies for up to date information on “Now you See Me” and other upcoming films.