Expanding the LEGO brand’s cinema universe, Warner Bros. Pictures has slated the animated 3D action adventure “Ninjago” for release on Sept. 23, 2016. “Ninjago” is The LEGO Group’s popular ninja-inspired line of building sets and minifigures that have gained their own legion of fans. 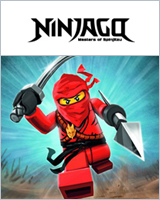 The film will be directed by Charlie Bean (TV’s “Tron: Uprising”), marking his feature directorial debut. It is being produced by Dan Lin, Roy Lee, Phil Lord and Christopher Miller. Lord and Miller wrote and directed the smash hit “The LEGO Movie,” which was produced by Lin and Lee.

“Following the huge success of ‘The LEGO Movie,’ we are very excited to build on the LEGO franchise,” Dan Fellman, President, Domestic Distribution stated. “We know there are already ‘Ninjago’ collectors who can’t wait to see their favorite characters on the big screen. This promises to be a terrifically fun and thrilling entry into our Fall 2016 slate, with broad audience appeal.”

“As proven by the worldwide popularity of ‘The LEGO Movie,’ we know that the LEGO characters have a global fan base,” Veronika Kwan Vandenberg, President, International Distribution, Warner Bros. Pictures said. “‘Ninjago’ is sure to delight international audiences of all ages with its own blend of action, adventure and humor.”