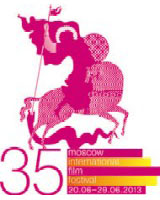 Awards for the 35th annual Moscow International Film Festival went to filmmakers from Turkey, Japan, South Korea, Russia and Poland, with 16 films participating in the main competition. The main award, The Golden George, went to the film “Particle” from Turkey.

Opening the ceremony, Nikita Mikhalkov congratulated Georgiy Daneliya with the semicentenary of his film “I Step through Moscow.”

Non-official awards were presented to the competitors in the morning on June 29 in the MIFF press-centre, which was located in the Movie-Actor Theatre.

The Jury prize of International Film Critique (FIPRESSI) for the best film of the main competition was given to the film “Memories They Told Me” (aka “A memoria que me contam”) by Brasilian producer Lucia Murat.

“Matterhorn,” by Holland producer Diederik Ebbinge was awarded an unprecedented number of non-official prizes. This film was the preferred choice of the Russian film experts and critics union, the Federation of Film Critics, and it won the Audience Award.

Special Prize for The Outstanding Achievement in the Career of Acting and Devotion o The Principles of K.Stanislavsky’s school:
KSENIYA RAPPOPORT (Russia)

This year, film screenings within the 35th Moscow International Film Festival were seen by 72,000 people, and 3,000 journalists were accredited for the event. Exclusive meetings, showings and press-conferences were held at 10 Moscow grounds, including Cinema October, where all the films of competition and out-of-competition festival programs were shown.