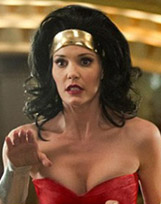 Production on the film began in March 2010 with a large ensemble cast that includes:

Filming would be done on a segment and then shut down for several weeks to wait on actors as well as directors due to their busy filming schedules. An official red band trailer was released on Oct. 3, 2012, and as the iTunes synopsis says, it is not for the easily offended viewer. Even the green band trailer contains some questionable subject matter and the film rightly deserves the R-rating that it has received.

A caution for viewers who are easily turned off to raunchy humor, you may want to stick to the green band trailer. The “What is Movie 43” trailer explains a bit about the storyplots, but be sure to be prepared for some clips that will make you question what it was exactly that you heard or saw. If you are a fan of the works of Peter Farrelly and Charles Wessler, though, this film might just be right up your alley. Proceed with caution.

From the twisted minds of producers Peter Farrelly and Charles Wessler comes “Movie 43” — the outrageous new ensemble comedy starring some of the biggest names in Hollywood. “Movie 43” is not for the easily-offended and contains jaw-dropping, sometimes shockingly disturbing, but always entertaining intertwined storylines you’ll have to see to believe.