“Comedians in Cars Getting Coffee,” the popular web series starring Jerry Seinfeld, will return with 24 new episodes exclusively on Crackle and comediansincarsgettingcoffee.com. New episodes are set to start production shortly and to begin airing later in the spring. 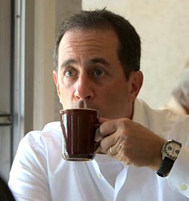 “This series was basically a silly, fun experiment in making a talk show where the host only talks to people when he wants to. And only while engaging in a meaningless activity. I don’t know if the idea was created by all the newly available technology to do it or vice versa. It certainly wouldn’t have been possible just a couple of years earlier,” said Seinfeld. “But I loved the freedom of form and just shooting it direct to the audience. My old friends at Sony took care of every possible issue and just made it all a pleasure. The response was great without us doing any ads or promotion and so we’re going to keep going. I like this new world.”

Seinfeld is the executive producer of “Comedians in Cars Getting Coffee,” which is produced by Embassy Row. “Seinfeld,” the comedy series co-created by Seinfeld and Larry David was named the Greatest Sitcom of All Time last month by a Vanity Fair/60 Minutes poll.