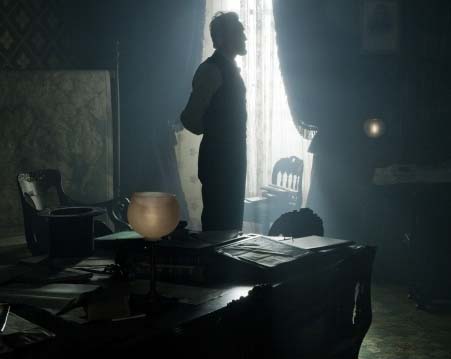 Despite the incredible talents of Daniel Day-Lewis as Lincoln and Tommy Lee Jones as Thaddeus Stevens, “Lincoln” would not keep the attention of high schoolers, even if being tested.

A historical dramatization of the last four months of Lincoln’s presidency, the film focuses on abolishing slavery. However, it is a challenging gift of historical rhetoric, using old American English vocabulary and syntax which makes it not as accessible to a wide audience.

As an example, in a less formal moment, Lincoln makes a visit to press his case for supporting the 13th Amendment using Euclid:

What was particularly interesting, as Adam Dale in his review on “Lincoln” pointed out, is the “multi-shaded look at the way the nation was once run.” While Lincoln makes visits and travels without security, pressure is mounting to support his favored legislation. In the following clip, an emissary of Lincoln is presenting the case for voting for the 13th. It is interesting to note the statement, “It’s not illegal to pay congressmen. They starve otherwise.”

Admirably, Steven Spielberg documents with loving respect a turning point in U.S. history. With mastery, he shows that the greatest significance of the Civil War was in the mind and heart of an irreproachable leader who was able to shift the moral culture of a nation.

Daniel Day-Lewis as Lincoln truly becomes our revered president with understated soft grace. In the following clip, he politely sticks to his righteous pursuit to abolish slavery before the Civil War is over.

Sally Fields as Lincoln’s wife, Mary, continues in her course as one of America’s most gifted actresses. Her strongest moment with Day-Lewis was when they were arguing over politics and her son’s desire to fight in the war. She is not cowed by his position or the traditional gender roles of acquiescence to a husband. She’s spunky and advises Lincoln with certitude and threats.

In the following clip she responds to congressional disapproval of her household expenses, showing a similar plucky self-confidence at a White House ball.

Besides all the hoopla and critical acclaim “Lincoln” has received, the bottom line is that this grandly important film is more of a scholarly re-enactment of rhetorical talent. For people like me, it doesn’t deliver because it depends on language sometimes difficult to understand without action, narration or the addition of more subtitles. After one legislator delivers a long speech, I was asking those next to me in the audience, “Is that guy for the 13th Amendment or not?” Only those who knew their history really well could guess, though not always with self-confidence. And that’s the same with this movie. Only those who know their history really well will be able to fully appreciate this scholarly film.

“Lincoln” is in theaters now.