New Terminator trilogy will begin in 2015 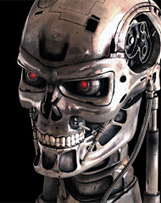 The first in a stand-alone trilogy, “Terminator” will be produced by Megan Ellison of Annapurna and David Ellison of Skydance. Dana Goldberg and Paul Schwake of Skydance will serve as executive producers. Laeta Kalorgridis (“Avatar,” “Shutter Island”) and Patrick Lussier (“Drive Angry”) are attached to write the screenplay.

Launched in 1984 with star Arnold Schwarzenegger as the title character, “Terminator” spanned three subsequent films, which have earned over $1 billion at the worldwide box office.