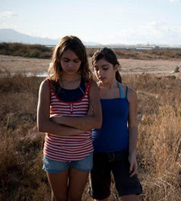 Sara Podda and Maya Mulas star in Salvatore Mereu’s new wave Italian neorealist romp in small town Italy. Not unlike small town America, the big dreams of two young girls are hemmed in on all sides by the small mindedness of their provincial environment. Screened at Open Roads: New Italian Cinema at New York’s Lincoln Center, “Pretty Butterflies” tugs at the heart and strengthens the soul at the same time.

As they bounce from adventure to adventure, one of the girls narrates the story of a day in their lives. An ordinary day and at the same time an exceptional day, there is intimacy, adversity, kindness and self-preservation as the two take on the world. To paraphrase the song, “They were young and knew they would always win.”

As the film develops, we see the characters being separated into two camps, male and female. The men are thinly disguised villains, barely in control of their own base instincts. The girls look for something better. Motorcycles whiz around, driven by men, of course, through the plaza and after the girls. Their harsh noises echo the bellowing of the men in the tight quarters of the girls’ apartment building. There is no privacy here, but there is intimacy, although that letting down of one’s armor must be carefully considered and carefully controlled.

Frequent dowsings in the sea, showers, bathtubs and under hoses cleanse the girls, while the men shoot up on drugs and refuse to be gainfully employed. The only man in the entire film who seems to be worth his weight in olive oil is the nearly blind boy Gigi (Davide Todde). Bullied mercilessly by the older deviates, he goes through his day believing in fate and praying to God for deliverance. In the end he attains love, if in a limited sense, with a girl who has become, like him, a social outcast.

The two girls are also social outcasts, but they have a charisma that keeps them in the good graces of most of the people, most of the time. The rest of the time they have been blessed with the chutzpah to say and do the things a girl has to do to survive in a rough neighborhood. By and large they survive and the sheer power of positive thought, which they seem to radiate through the neighborhood with a power that goes through brick walls. The two are maturing sexually and there are ample lesbian overtones. However, the screenplay stops short of the realization of their sexuality, choosing instead to depict their virginity as being the source of their inner strength.

As the identities of the male and female groups jell, the two sides of the coin are developed. Men vs. women as degenerative sexuality and disciplined virginity, instinct driven males and rational females, working women and lazy, drug addicted men and intimate women and alienated men. Not a very bright outlook for the male gender, and not a very balanced viewpoint on the part of the film makers. Perhaps this is metaphorical, not to be taken literally. Hard to say, but it emerges as one of the weak points of the film.

In spite of that the movie is drenched in the lush, gritty street-wise cinematography of Italian cinema. For the aficionados of that, this modern take on neorealism comes off just fine. It does not have the swinging timeliness of “La Dolce Vita” or the stabbing loneliness of “Nights of Cabiria” but it is great to see the wonderful art form preserved. The shots are brutally unvarnished, and yet every one is a work of art that would stand alone as a still picture. The vibrant noise of the motorbikes is contrasted with the wind and the waves at the beach, the soft rumbling of the bus and the intermittent crying of a baby wanting to be held.

As compared to New York and Hollywood films, Italian films seem to be more about life and less about people and places. The writers and director of this movie are more able to move beyond the tourist aspects of the place and time and create a story and feeling about universal values, events and emotions. This is a strength of Italian cinema that seems to survive year after year, decade after decade.