Review: The Act of Killing 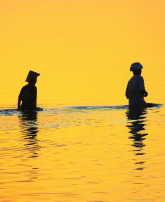 Every now and then, a film comes along that defies description. Typically these films are so horrible and so irresistible that the viewer wants to forget he or she never saw the film, but is terrified that may be impossible. When Werner Herzog & Errol Morris team up to produce a documentary about the mass killings in Indonesia in 1965, it is inevitable that such a film will come to life. This flick is as hard to reconcile as it is to forget.

In a time of incredible chaos, bloodshed and incendiary politics, the Indonesian government was overthrown in 1965. Gangster Anwar Congo was eking out a living scalping movie tickets and running whatever penny-ante con they could find. American movies were big in the country and the gangs came to identify with the gangster genre as they were hustling tickets in front of the theatres.

As the political tides ebbed and flowed and America’s fear and loathing of the communists surged, Congo and his pals found a new avocation. Backed by anti-communist Western powers, they founded terrorist death squads throughout the country. After brutally torturing and murdering a million accused communists, intellectuals and ethnic Chinese in a year, until the tides changed yet again and the brutality slowed to a stop. In spite of that, the deaths squads remain and, apparently, still enforce a paramilitary truce that protects the murderers from reprisals. To this day the perpetrators are protected by the paramilitary which still has some sway in the country, although in the day-to-day life in the modern cities their presence is as much a joke as a statement of power.

A few years ago, in one of the most bizarre inspirations in film history, director Joshua Oppenheimer, in an act of considerable courage, travelled to Indonesia and challenged Congo and his co-perpetrators to make a film reenacting those times. The gang took him up on it. The film is co-directed by “Anonymous” and Christine Cynn. In fact, the majority of the cast and crew credits read the same as the co-director, “Anonymous.” Although more of a modern day Klu Klux Klan than a WWII Gestapo, the screaming and gesticulating youth squads still echo the calls to kill the communists. The general populace goes about their business, but nobody is willing to challenge them outright.

The result is a documentary within a documentary. The overall narrative, delivered by Congo and others, is the pure and unvarnished truth about the mass extermination of every man, woman and child the paramilitary death squads could possibly associate with communism. Within this film is the film written and performed by the former terrorist capos themselves. Dressed in outlandish costumes and outlandish makeup and dancing to bizarre music, the killers pretend to kill themselves and others, reenacting the most demented and psychotic acts of violence the world has ever seen.

Initially jumping at the chance to be in front of a camera, achieving the fame that their insanity denied them, the gangsters reenact the details of the strangulations, beheadings, rape and torture that was their daily bread for years. In the end, there is the suggestion that Congo sees a glimmer of realization about what he has done, at least as much realization as a lunatic can muster. In a real life repetition of a scene between Jack Nicholson and Ray Winstone in the gangster flick “The Departed,” one of his friends talks to Congo about maybe seeing a shrink, to make the bad dreams go away. There is no indication he took up the suggestion.

What we get instead is the argument that might makes right. As the gangster tells us, the immigrant Americans killed the native Americans, and so on. The fact is that he is right; there are no war criminals on the winning side of a war. In the end, the echoes of Hannah Arendt’s “Banality of Evil” resound through the theatre. The trademark of these killers will forever be the fact that they simply could not figure it out. The true crime lies in the support given them by the Western powers, blinded by their fear of communist insurgence in Southeast Asia.

Unlike Rwanda, South Africa or Germany, there have been no trials or memorials to this time. Perhaps the backers of the lunatics committing the crimes do not yet have the strength to own up to their part in it. 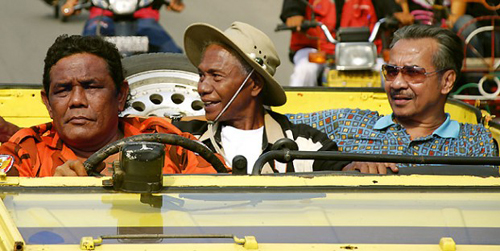