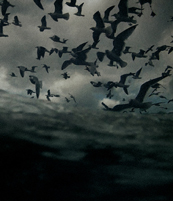 Sip some Ginger Ale, the sailor’s stabilizing brew, to get you in the mood to travel on this grueling ship of hardy yeomen. Using photography that defies the wet, windy, turbulent, listing life at sea, this ship experience off the coast of New Bedford, famed 19th century whaling seaport, takes the viewer into the bowels of worker hell.

You may ponder the possible meanings of the title, “Leviathan,” a Biblical term referenced in the film.

“Any hope of subduing him is false; the mere sight of him is overpowering” (Job 41:9).

What monster leviathan is conjured from the frothing seas, the red-streaked water refuse, the heavy steal netting, the whining pulleys and the puffy faced men with swirling tattoos working methodically, monotonously, like automatons at task? What or who is the behemoth?

Sea gulls caw throughout the night, accompanying the boat as scavengers, dipping their fat bellies into the water to feast on raw remains.

There is no conversation or celebration, no rest or reflection, no light-hearted moment or lilting narration. There is only this honest documentary of a demon that gorges on life, holding its charges in slave-like labor amongst the sea-salt taste of perspiration and ocean spray, slippery scales, clanking chains and the smell of freshly suffocated fish.

“When he rises up, the mighty are terrified; they retreat before his thrashing.
The sword that reaches him has no effect, nor does the spear or the dart or the javelin”
(Job 41:25-29)

Being that “Leviathan” was created as an experimental project about the North American fishing industry at the Sensory Ethnography lab at Harvard University, one can assume that there are multiple layers of interpretation. One thing that is for absolute sure, the technical use of camera equipment, coloring and capture angles have resulted in a work of art that would be wonderfully displayed as a visitor meanders through a fish industry museum.

As a metaphor, the leviathan may represent the fishing industry, the rape of the ocean, the insatiable waste product of human greed, or something even more abstract.

Perhaps it could also be a treatise on the demonic nature of the human condition that may ultimately self-destruct through its own ruthless pillage of resources.

Then again, with the Biblical quote at the end, perhaps the title offers a spiritual observation of the nature of a Higher Power, whether godly or satanic. The film is open-ended in purpose and ambitious in production, waiting for your reaction and interpretation.

“Leviathan” was nominated for several awards, including the 2012 Best Doc Award at the Chicago International Film Festival. In 2012, it won the Los Angeles Film Critics Association award for Best Independent/Experimental Film and Video. It ends with this quote from Job 41:

’32 he maketh a path to shine after him
one would think the deep to be hoary.
’33 upon earth there is not his like.
who is made without Fear.