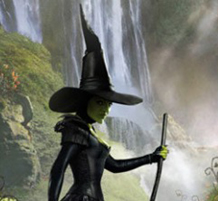 With just over two months left until its theatrical release Disney’s “Oz: The Great and Powerful” has been slowly rolling out new content including a full-length trailer as well as a very interesting poster.

While the story and the Land of Oz is one quite familiar to nearly everyone, Disney is taking the classic stories from L. Frank Baum’s 1900 classic “The Wonderful Wizard of Oz” and doing what Tim Burton did with “Alice in Wonderland” by reinventing and retelling the story in a more adult way. While many revere the collections of stories to be quintessential to the lore and magic behind the magnificent 1939 film “The Wizard of Oz” starring Judy Garland, not many can now claim they have read the book recently. Yes, there are legions of dedicated fans who would beg to differ; the average movie-going American probably is not.

One of the most prominent aspects to all of these promotions is teasing the audience and trying to get them to guess which of the three witches eventually becomes the Wicked Witch of the West. It is clear that Michelle Williams’ character, Glinda, doesn’t choose the path of evil, and that either Evanora (Rachel Weisz) or Theodora (Mila Kunis) could become the pivotal baddie turned green who would eventually battle Dorothy for the ruby slippers. So with all of these questions left unanswered Disney should leave movie-goers guessing and anticipating, right? Well for those wanting to know all about Disney unintentionally ruining my mystery behind these characters, then read on.

WARNING! Major plot developments and spoilers after the poster! If you wish to remain in the dark then please choose one of our other great stories.

Since you continued to read on I can only assume to wish to know the truth. Disney has spoiled the surprise behind the identity of who becomes the Wicked Witch of the West by posting a photo of official film merchandise in their online store, which includes this mug that shows us that Mila Kunis is the one who will become the evil witch.

While the emerald tinted skin is missing, the facial and nose prosthetic clearly show a change from her once beautiful face into something filled with anger and hate, plus the wording inside the cup clearly states that she will be the Wicked Witch of the West .

Check out the picture below! 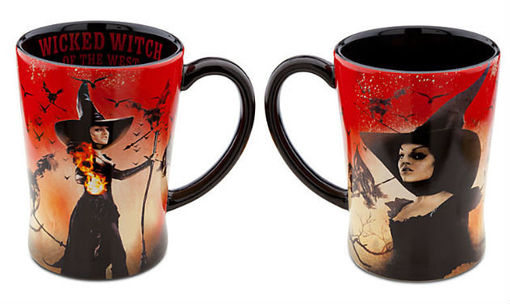 While I do think it was a mistake for Disney to post this merchandise so soon and spoil the surprise, I am happy Mila Kunis is the one who will be changing rapidly. The trailers appear to show a romance between Kunis’s Theodora and James Franco’s Oz, as well as being very misleading by having Weisz’s Evanora dressed in green and even battling Glinda in a magical fight in the movie’s theatrical trailer.

So if they have gone to great lengths to mislead us into thinking it was clearly Weisz’s character, then why ruin the surprise?

So what do you think of this big reveal and do you think Disney should have waited to unveil this Wicked Witch of the West merchandise? Leave a comment and let us know.

“Oz the Great and Powerful” lands in theaters March 8 and will be available in 3D, and IMAX 3D as well as traditional 2D.