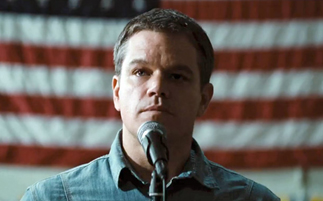 With “Promised Land,” Matt Damon, John Krasinski and Dave Eggers combine forces to knock out a challenging screenplay on the ongoing American battle over environmental issues. The battle du jour is over fracking, which involves breaking up the earth’s crust several thousand feet down to release natural gas which is then pumped to the surface for distribution, like oil, across America. Scientists predict there is enough natural gas under America to supply needs for the next 125 years.

Honest, sincere Steve Butler, perfectly played by Matt Damon, comes to a farming community to offer genuine, heart-felt relief from economic hardships. Signing on the dotted line, as explained by his single-parent partner, Sue Thomason, played by a driven Frances McDormand, could guarantee a college education for their children and maintenance of their farming operations. Together, Damon and McDormand represent the corporation eager to start fracking practices underneath the area’s cozy farming lands.

However, does fracking contribute a significant negative effect on the environment?

The mayor, playing the political card, is all for the venture as long as he gets a cut. Hal Holbrook, playing an engineer-turned-teacher, is a cautious voice of truth and argues against the mayor.

Then charismatic, extroverted Dustin Nobel, played by the dashing John Krasinski, comes to town as the environmentalist seemingly supporting Holbrook. He blows the Damon/McDormand wealth guarantee with dire warnings about the devastation fracking causes the environment.

Krasinski ends up charming the town’s pretty elementary teacher, Alice, played with innocent, happy charm by Rosemary DeWitt, but Damon likes her, too. A triangle spins.

Damon, Krasinski and Eggers are all progressives, but not just about the environment and human rights. They have delved deeply into issues of honesty throughout their separate works: Eggers in his outrage at his father and people in general in his book, A Heartbreaking Work of Staggering Genius, Kraskinsi in his film on duplicitous boyfriends in “Brief Interviews with Hideous Men” and Damon through his therapy sessions in “Good Will Hunting.”

It’s not just the recognition that corporations are focused on the bottom line, but so is everyone else. We are all compromised to some degree. So how do we know who’s advising us truthfully and in our best long term interest? What about lies of omission? What about those lies we want to hear?

The “Promised Land,” a biblical reference to the land God promises Abraham, is the land Damon promises will deliver financial security. But it is also the land that we safeguard and the land cherished by the farmers. It provides nourishment and a way of life to the body and soul of America.

The bottom line is that this is an important film to see, not just because fracking is the new technology. Eggers, Krasinksi and Damon have developed a film about the soul of America, and determining the right path we should take in the face of the numerous influences seducing us to one side or the other.