Review: Oz the Great and Powerful 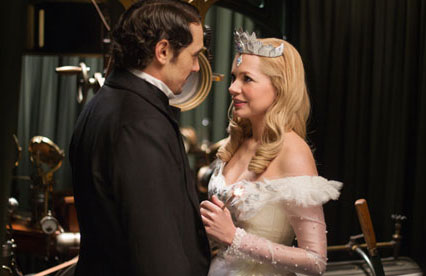 L. Frank Baum created the wonderful world of Oz in 1900 and with 14 novels in the series, Oz has vast and interesting characters to draw upon and elaborate lands to explore. In 1939, “The Wizard of Oz” sky-rocketed Judy Garland to stardom. It remains the most significant among the many adaptations of the author’s characters and the world of Oz to date. Well, Disney believed that there were more stories worth telling, so they hired director Sam Raimi (“Spiderman,” “Spiderman 2”) to breathe life into the story.

While no film will ever begin to re-create the magic of Victor Fleming’s original — and you should not go into this movie thinking of it in that way — Disney has constructed a beautiful and whimsical world for these characters to inhabit that is thrilling, funny and always beautiful. If you go into the film thinking along the lines of Tim Burton’s 2010 adaptation of “Alice in Wonderland,” you will enjoy the ride and appreciate all of the mystery and wonder this trip back to Oz has to give.

The Plot: Among a small traveling circus in Kansas circa 1905 is a magician named Oscar “Oz” Diggs (James Franco) who is revealed to be more of a con man and illusionist — as well as a womanizer. When he is revealed during his show to be a fake, he thinks things can’t get any worse for him … until the circus strongman comes after him when he finds a token Oscar uses to lure women. Oscar escapes in a hot air balloon only to be quickly sucked into a tumultuous tornado where he promises God he will change if his life is spared. He lands in a mysterious land where he meets a beautiful woman, Theodora (Mila Kunis), who tells him of a prophecy where a wizard named Oz will descend from the sky, destroy the Wicked Witch and rule over the land. Seizing this opportunity with a few parlor tricks, he convinces the Theodora he is that man.

The many lands of Oz hear of the prophetic arrival of Oscar and begin to rejoice at the news. On the way to the Emerald City, the pair rescue a monkey named Finley (Zach Braff) and he pledges a life debt of companionship and servitude to Oscar. Theodora’s older sister Evanora (Rachel Weisz) – the right hand of the King and protector of the throne — is skeptical of Oscar being the prophesized Wizard and challenges him to travel to the dark forest and destroy the Wicked Witches’ wand.

On the road to the dark forest, Finley and Oscar come upon China Town where all of the porcelain inhabitants as well as the buildings have been destroyed — but there is one survivor, a China Girl (Joey King), who joins the two on their journey. All is not what it appears to be when the witch in the forest turns out to be a good witch named Glinda (Michelle Williams), who says the King was killed by one of the other sisters, who is secretly the Wicked Witch.

Now, this rag tag group must join with Glinda’s friends of tinkerers, farmers and munchkins to create a plan to take back the throne and overthrow the Wicked Witch for good. This will be hard to do without any real magic, so Oscar must use his wits and cunning along with his knowledge of technology to con his way to victory. 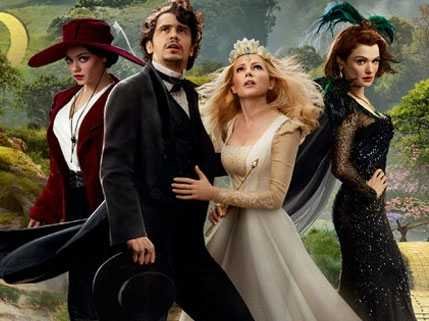 My Thoughts: I wasn’t sure what to expect going into the film, but “Oz the Great and Powerful” really stunned me on a visual level. When the sepia tone palette turned bright and vibrant upon our arrival to Oz, it is just as beautiful and stunning as the first time I watched “The Wizard of Oz.” The use of 3D was magnificent and you could tell during the opening credit sequence that Disney was taking full advantage of the technology.

The story of the movie was compelling and the acting was good, but it’s hard not to imagine how different it would have been if Disney’s first choices of either Johnny Depp or Robert Downey Jr. would have had a chance to show what likely would have been completely different interpretations of the titular character. While James Franco was charming enough in the role, the true stars of this film were the witches and, surprisingly, the CGI characters of Finley the monkey and the precocious China Girl. Finley gives much comedic relief with his anecdotes and whit while China Girl gives us attitude and spunk. The two characters are so well done you forget they aren’t real, which is a compliment to the animators and actors voicing them.

Plus, the witches were great, the best being Michelle Williams as Glinda. She is the one with the most development and screen time and she is just as lovely as the original, while also adding her own quirks to the role. Mila Kunis and Rachel Weisz were great as well. They are seen mostly together and the big reveal of who is the Wicked Witch has its own twists and turns, mixed with some stellar performances — complete with flying broomstick and cackle.

One important thing to stress is the need to see this film in the biggest format you can – and also in 3D. You will be fully immersed in this world and to not take advantage of some of the best 3D I have seen in a non-animated film in a long time would be a shame. I know IMAX isn’t readily available to everyone, but this world is so grand you will benefit from seeing it in the largest theater you can. You won’t believe how wonderful the landscapes, exotic plants and animals mixed with some big action sequences will look on a giant screen. Many theater chains offer enhanced viewing experiences even if they don’t offer IMAX and you should take advantage of those as they typically have bigger screens and a more elaborate sound system, which will amplify the beautiful score in the film by the talented Danny Elfman.

Besides the visuals and some great performances, another aspect of the film that I liked were all the homages and winks to the original included in the film. You can tell everyone involved in the making of the movie took care and consideration to connect “Oz the Great and Powerful” to the 1939 version, while also creating something fresh and new.

Disney has created another family classic and brought a familiar story to a new generation once again. The decision to hire Sam Raimi to direct this film was a good one, as you can clearly see his influence and visual style behind the camera throughout the movie. Disney seems very confident in the success of “Oz the Great and Powerful” as they are planning a sequel already and rightly so. There is more to explore in this land before Dorothy Gale lands in it.

Did I have any problems with the film? Of course. There is some less than witty dialogue and certain scenes that felt rushed, but if you take the film at its face value and don’t try to compare it to anything else, it is a beautiful and illustrious adaptation that you won’t mind watching over and over again with the entire family.

“Oz the Great and Powerful” is in theaters now. It is available in 2D, 3D and IMAX 3D and is rated PG for scary images, sequences of action and mild language.