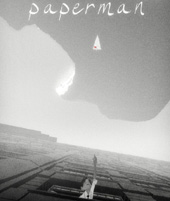 Fresh off its win at the 85th Annual Academy Awards for Best Animated Short, “Paperman” is available to watch online now.

“Paperman” tells the story of love and the magic that surrounds it. Set in 1940s New York City, we meet a young man waiting on an elevated train platform when a gust of wind blows a paper from his hands and becomes lodged on a young woman’s face, leaving a red lipstick imprint.

While this short film has all the elements of a classic Disney tale, the most obvious difference is the use of monochrome coloring and a mixture of traditional hand-drawn animation and CGI. Directed by long-time Disney animator John Kahrs, with an original score by Christophe Beck, “Paperman” is wonderful and full of hope and a universal message of fate and love.

Just like many of the Pixar short films that play before their new animated features the film is without dialogue, just accompanied by sound effects and a wonderful score. The music by Beck is uplifting and keeps the tone of the film light hearted and happy, even when things appear bleakest for our main character. I love that the only use of color is the red lipstick. It is such a highlight and reminds me of the red coat used as the only color in Steven Spielberg’s “Schindler’s List.”

As I said in my Oscars recap, I do believe that “Paperman” deserved to win for Best Animated Short. It evokes classic silent films while also bringing a hint of modern themes and a belief in love at first sight. While the animation is meticulous and very expressive, it is never gaudy. The writing mixed with the animation lets us connect and care for both of the main characters without a word ever being spoken. It is incredibly well done and I hope to see many projects such as this in the future from Disney Animation.

What did you think of “Paperman”? Are you a fan of the style and would you like to see more? Leave a comment and let us know.