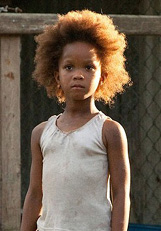 However, Willow Smith had a major growth spurt since the initial announcement was made and aged out of the part, leaving the role open for another child star. It didn’t take long to find a perfect replacement. Less than a month after news broke about Willow’s departure from the project, Overbrook Entertainment and Sony Pictures have found their Annie in Oscar-nominated Quvenzhane Wallis.

At nine years old, Wallis is the perfect age for the part. Aileen Quinn, who starred in the 1982 film version of the classic Broadway musical, was only 10 when she stole movie audience’s hearts with her portrayal and Wallis will no doubt do the same. She already won us over with her remarkable performance in “Beasts of the Southern Wild,” which is available on Blu-ray and DVD by the way.

“Easy A” director Will Gluck, who is helming the film, is in the process of revising the screenplay penned by Emma Thompson, which was also rewritten by Aline Brosh.

For the full press release, read below:

Overbrook Entertainment, Marcy Media, director Will Gluck and Sony Pictures Entertainment have cast Academy Award-nominee Quvenzhané Wallis, the star of Beasts of the Southern Wild, in the title role of Annie, it was announced today by Doug Belgrad, president of Columbia Pictures, and Hannah Minghella, president of Production for the studio.

Commenting on the announcement, Minghella said, “With the recent Academy Award® nomination and critical acclaim, Quvenzhané Wallis is a true star and we believe her portrayal as Annie will make her a true worldwide star. She is an extraordinary young talent with an amazing range, not only as an actress but as a singer and dancer, and we can’t wait for audiences to further discover her.”

Annie will be released during the winter holiday season in 2014. The film is being directed by Gluck and produced by James Lassiter, Jada Pinkett Smith, and Will Smith through Overbrook Entertainment, and by Shawn “JAY Z” Carter, Jay Brown, and Tyran “Ty Ty” Smith through Marcy Media. Gluck is currently revising the film’s screenplay, which was written by Emma Thompson and rewritten by Aline Brosh McKenna based on the musical stage play “Annie,” book by Thomas Meehan, music by Charles Strouse, lyrics by Martin Charnin, and on “Little Orphan Annie,” © and ® Tribune Media Services, Inc. The film is being overseen at the studio by Andrea Giannetti and Devon Franklin.

In addition to Steve McQueen’s “Twelve Years a Slave” Wallis can also be seen in “Boneshaker”, which debuted last month at Sundance and screens at this year’s New York African Film Festival in April.

I have to say, having grown up with the 1982 film, I wasn’t at all excited about this update, but with cutie pie Wallis starring in it, I’m totally sold. Come Dec. 25, 2014, when Sony and Overbrook Entertainment’s re-imagining hits the theater, I’ll be there. Will you?