Growing up in the ’80s only helped the fact that I have great admiration for Sylvester Stallone. He was at that time, the person that we sought after when looking for great action movies. He was the man people around me admired and looked up too. He was “Rocky” and “Rambo” and many others. There were other great action stars from that time period that I admired — such as Arnold Schwarzenegger, Bruce Willis, Steven Seagal and Jean Claude Van Dammme — but Stallone was “Rambo,” … no ,seriously, he was “Rambo.” People still name their guard dogs “Rocky” or “Rambo.” Why? Because he was tough, and as far as I am concerned, he still is.

The interesting thing is that the media was always playing all of these actors of each other. They would claim competitive hate between them, and lots of animosity that I never saw. As a matter of fact, the paparazzi would constantly snap pictures of them having lunch or smoking cigars together. Later, three of the afore-mentioned actors — Stallone, Arnold and Bruce — went into business together; in this case, the restaurant business. With the grand opening of Planet Hollywood in 1991, it became clear these guy were all friends.

As a kid and growing up, one of my dreams was always to have Stallone and Arnold in a movie together. There was one rumor after another throughout the years of it possibly happening, but it never did. Now, as an adult, it appears my dream is going to come true. Yes, the genius that is Sylvester Stallone has conceived a story that will finally bring him and Arnold, along with others, together on film for the first time!

You probably already have heard of “The Expendables,” a dream come true for many such as myself. The plot information releases to the public tells us “The Expendables”is a hard-hitting action/thriller about a group of mercenaries hired to infiltrate a South American country and overthrow its ruthless dictator. Once the mission begins, the men realize things aren’t quite as they appear, finding themselves caught in a dangerous web of deceit and betrayal. With their mission thwarted and live in danger, the men struggle with an even tougher challenge one that threatens to destroy this band of brothers.

Their is so much to excite action fans in this movie. Besides the fact that it is written by Stallone himself, he is also acting in and directing the movie. Now, I have already hinted Schwarzenegger making an appearance in the movie, but did I mention Jason Statham, Jet Li, Dolph Lundgren, Eric Roberts, Steve Austin, Mickey Rourke, Bruce Willis, Danny Trejo and more are in it as well?

Yes, this movie is going to be all kinds of greatness! And now, we are proud to display before your eyes, this interesting poster for “The Expendables.” I am not quite sure who’s back we see in that picture. It could be one of the wrestlers in the movie, but what is interesting is the tattoo. This is the logo of “The Expendables,” and all the members of “The Expendables” team are supposed to have it somewhere on their body. Some have a small one in their forearm, others may have a big one on their backs just like in the poster. There are already much braver fans than me, that have tattooed this logo on themselves.

Yes, this may be the greatest group of action stars ever assembled, and it maybe the greatest action movie ever made, and we will find out on Aug. 13. 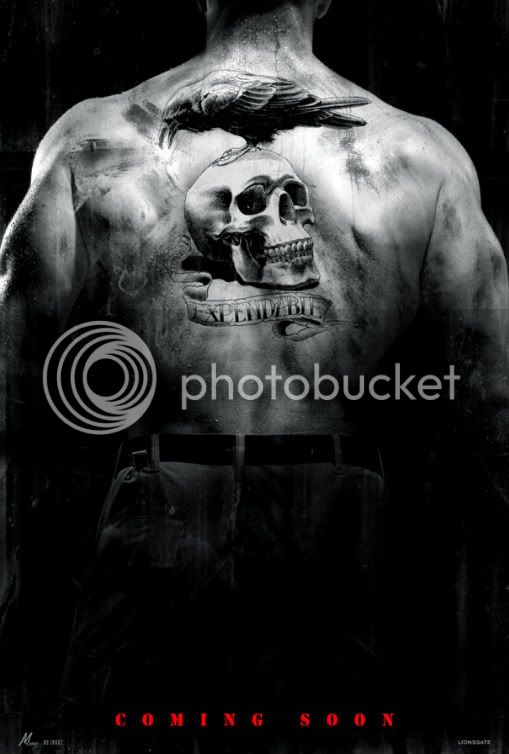