Production has begun on Chappie

Sony Pictures Entertainment and MRC have begun production in Johannesburg, South Africa, on “Chappie,” the next film from writer-director Neill Blomkamp, it was announced by Doug Belgrad, president of Columbia Pictures and Hannah Minghella, president of Production for the studio, and http://loans-cash.net. 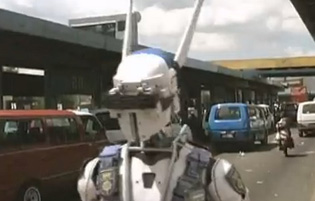 “Chappie” is co-produced and co-financed by Sony Pictures and MRC; the film will be marketed and distributed worldwide by Sony Pictures. Blomkamp will direct “Chappie” from a screenplay he has written with Terri Tatchell. He will also produce the film with Simon Kinberg. The movie is based on a short film by Blomkamp (from which the accompanying picture was taken).

After being kidnapped by two criminals during birth, Chappie becomes the adopted son in a strange and dysfunctional family. Chappie is preternaturally gifted, one of a kind, a prodigy. He also happens to be a robot. The film will star Sharlto Copley as the voice of Chappie, Hugh Jackman, Dev Patel, Sigourney Weaver, Ninja, Yolandi Visser, Jose Pablo Cantillo and Brandon Auret.