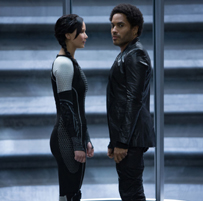 With less than a month until its release, Lionsgate is pulling all the stops for “The Hunger Games: Catching Fire,” giving the audience more of a glimpse into the treacherous arena for the 75th Hunger Games. We also see howler monkeys, Jabberjays and, of course, Jennifer Lawrence’s Katniss Everdeen.

The movie’s final trailer does not disappoint at all. Lionsgate offers the viewers more scenes not only of the districts but of the arena as well.

The heightened tension in the districts for Katniss and Peeta (Josh Hutcherson) is evident and the fear that President Snow (Donald Sutherland) feels is almost tangible as he watches Katniss perched atop a tree ready to shoot an arrow into the “sky” of the arena, with intense scenes of Katniss, Peeta and other tributes running from perils in the arena.

In addition, check out the following IMAX “Behind the Frame” featurette for the film. It explores the use of the IMAX frame as the filmmakers explore the arena.