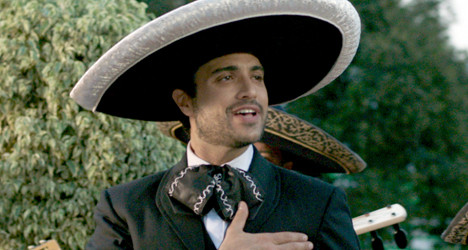 Pedro Pablo Ibarra’s “Pulling Strings” stars Jaime Camil as Alejandro (Alex), a single father who is raising his 9-year-old daughter alone. Alex has no property, permanent address or passport, which results in him getting little attention from US Embassy worker Rachel (Laura Ramsey). Desperate for a visa for his daughter, Alex gets the chance of a lifetime to show Rachel he is deserving of a visa when she passes out drunk at a party for which Alex’s Mariachi band had been hired. Rachel’s boss (Tom Arnold) entrusted her with his work laptop and when she wakes up at Alex’s house, she notices it is “missing.” Alex thinks by helping her find it that she will give him a visa.

Camil does a stellar job in this movie, as he is able to showcase both his musical and acting ability. Ramsey also plays a phenomenal role as Rachel, especially by using great body language. Without saying a word, you can understand her emotions throughout the film. And the film’s comedic relief is created by Alex’s friend Canicas (Omar Chaprro).

Good acting is nothing without great chemistry and every character interaction was natural in this film, which is all I ask for in a movie. One of the reasons “Instructions Not Included” is among my favorite films of this year is the film’s dynamic father-daughter relationship. The father-daughter relationship is an important aspect of Mexican culture and it is presented in the movie in a way that warms your heart because all too often the father is depicted as the bad parent. And just like in “Instructions Not Included,” the best relationship in “Pulling Strings” is between a father and his daughter Maria (Renata Ybarra). One of the best scenes in this film is when Alex sings a beautiful song to Maria at her school.

The film also teaches us that some lies can be good, because had Alex not lied to Rachel, then they would not have gotten to realize that they were attracted to one another. Rachel showed Alex compassion and support for his talents and Alex showed Rachel the beauty of Mexico through Music and the culture.

Pantelion Films, whose goal is to bring wider theatrical distribution of movies aimed at Latino audiences, has struck gold again with “Pulling Strings,” which explores the idea of love and honesty through the music of the mariachi. This film did make the Top 10 upon its release last weekend, but of course going up “Gravity” is a tough challenge for any movie. While the plot is more predictable than “Instructions Not Included,” “Pulling Strings” is a great movie on its own terms and is an enjoyable movie well worth the price of admission. 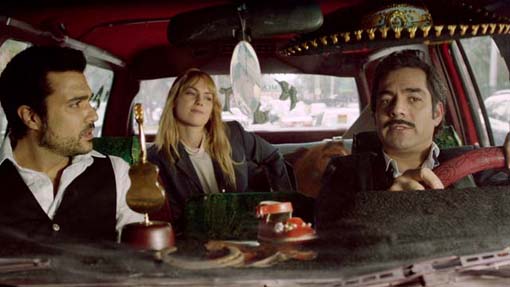