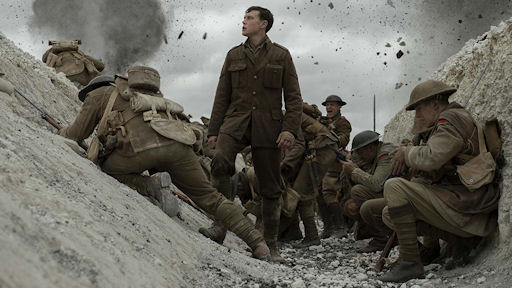 Edited to simulate a continuous take, a plot that might otherwise be mundane and trite becomes a tense, power-packed race for life. The lethal terror of World War I is turned on its head by the realistic scenes of boredom, fear and rats in the trenches, making filth the worse enemy and reducing heroes to wild animals.

Rising above this are two Lance Corporals, Blake and Schofield, chosen for a virtual suicide mission to warn of a German trap that will kill hundreds or thousands of Allied troops. As the two are shown walking through the trenches, the gut-wrenching tension begins immediately, amidst the garbage and vermin filled holes and the dirt, mud and more dirt and mud. The two are fearful, but more honored and energized by the assignment than the resigned walking dead in the trenches. That will change.

This film expands off the screen at every turn by nods to other great films. The viewer might have read a comparison to “Saving Private Ryan,” another story about a wartime mission of mercy, but the two could not be more different. The pacing and riveting tension owes more to the indie great “Run Lola Run,” with Franka Potente running through the entire screenplay to save her lover from a gruesome death.

If a Tom Hanks comparison exists, and it probably does not, the closest thing might be “Forrest Gump” and the household “Run Forrest Run!” line. As Lance Corporal Schofield runs his race for life, he has that same upright posture, not like a sprinter, but more like a person panicked, running as in a cartoon where the legs are moving so fast the torso is drawn back trying to catch up. Meeting a destitute mother and child, Schofield (George MacKay) shares a human moment, as Brad Pitt did with the sit-down dinner in “Fury.”

As events unfold, the actors drop into the background. The messenger falls into the raging river and loses control, as if he had any to begin with. Control, and the wartime lack thereof, is the theme. No one controls what happens in war, but soldiers can control how they react to war. Underlying human dignity and a sense of human purpose come to the fore, especially in the most traumatizing and disparaging times.

After the raging river sequence the viewer has lost all sense of location and the film moves from action to the sublime. When Schofield awakes, semiconscious and still gasping for breath in a field religious service, he has spiritually died and gone to heaven. In fact, we all have. He no longer has a weapon; he is no longer even a soldier. No matter what happens after that, he has survived spiritually.

The skilled cast aside, it is director Sam Mendes and lenser Roger Deakins that carry the day. Deakins’ military religious service looks gleefully like the religious revival in his Oscar nominated “O Brother, Where Art Thou?” A frank and unvarnished look at the horror of war through the eyes of the participants, this movie escapes the slightest trace of voyeurism. So realistic you feel out of breath.