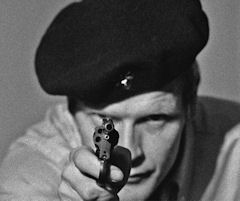 History is ignored at the risk of repeating it, and this movie grapples with the junction of art and memory. It may not be possible to convey historic images without distortion. This does not stop director Jean-Gabriel Periot from splashing “ripped from the headlines” archival footage across the screen. Viewing thousands of hours of footage of the Bader-Meinhof gang he chose the minutes that take us inside their heads.

Coalescing from the chaotic political cacophony of 1960’s political criticism, Andreas Baader and Ulrike Meinhof were stridently opposed to the governing capitalist establishment. Nothing unusual there, but they went further than almost any other group to promote their position with violence. The movie takes us through a succeeding escalating series of street protests that turn lethal, to a crossroads of thought versus action. Was there no turning back then? Is there now?

Martin Luther King chose non-violence. Baader-Meinhof’s Red Army Faction violence put them in prison, but gained them widespread publicity, and even support. Looking at years behind bars, the group may have pinned their hope on the Palestine Liberation Organization’s hijacking of Lufthansa Flight 181 in 1977. Demanding their release, instead the PLO sealed their doom.

Periot leverages the historic success of the epic Nazi propaganda films with clips of legendary film makers discussing the polemics and practicality of making movies. The distortion is there, but that is what film is for. It is the art that imbeds the history in our sub-conscious, not the physical manifestation of the lights and screen. This is translated into the mental anguish of the M-B leaders as they struggle to put their fight into rational terms, struggle to put into words the humiliation of nations of ignorant people enslaved by a system they will never control.

The newspaper magnate Springer is the first to be attacked. Not surprising as Baader was a journalist and Meinhof a full-fledged member of the literary elite. Perhaps an inverted attack on themselves, the theme resonates with art as propaganda. There is always a message and the message may well be for fame and fortune. The story forces us to think about the goals of the protagonists and their place in history next to Springer the “mind-washer.”

This vibrant footage would be nothing if it did not resonate so completely with current political rhetoric. Every day we are faced with alternate realities that are little more than conflicting falsehoods. If nothing else, this movie looks at past events that almost exactly parallel what is happening today. We seem to have moved past the Molotov cocktails and the AK-47s (although not entirely), but the violence is there nonetheless. Perhaps even more visceral and threatening for its psychological impact as opposed to the physical.

Can we even make a movie about this? Is it possible to convey the emotion of the times on a screen? The filmmaker gives it a good try. 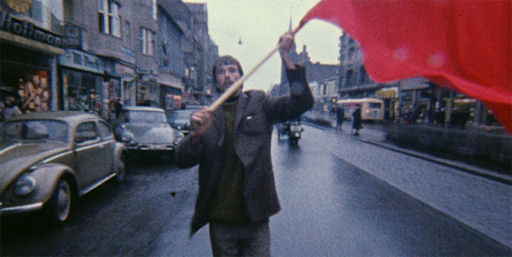