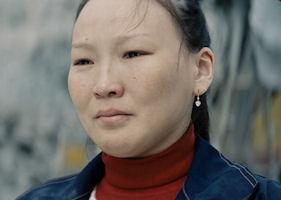 Would any normal, healthy young adult choose to live with parents in an animal-hide yurt out on the freezing tundra of northern Russia with no other sign of human life? Isn’t being self-sufficient, melting a block of ice for water and ice fishing for dinner, a dream adventure? It’s one thing if you are ignorant about planes, cars, plumbing, and electricity, but quite another if you know your options.

Before the film begins, young Ága has already left the primitive life of her family to work in a diamond mine community a long way from home. Her parents cannot forgive her. Though she does not show up for most of the film, Ága represents what is most important in life to her parents – family and culture. Her departure has left a rift back at home because her parents cannot understand or accept her choice to leave.

It’s the story of the child who leaves to seek her fortune and the fable of Odysseus, searching for his own identity; it is the universal generational divide.

Often shot appropriately with a fixed camera, Nanook (Mikhail Aprosimov) and Sedna (Feodosia Ivanova) move about their animal hide yurt with bulky animal skin clothing. Though we hear them, we do not always see them. They live a solitary existence with their beautiful blond sled dog out on the endlessly flat, snow-covered tundra region in northern Russia. The reindeer have become scarce and animals are dying, signs that their sustenance and old way of living is also ending.

Sedna has made an ointment with her mortar and pestle. She applies the goo to a blackened lesion on her abdomen. It seems to take a pain away, but we are left to wonder if this fist-sized black sore represents the slow, unstoppable death and decay of Inuit life on the frozen tundra. Nanook, her husband, spots dead animals in the snow. While he buries them, his worried eyes gaze up at the hot jet contrails crisscrossing the skies with a foreboding sense of irreversible change.

Ága represents an eclipse in traditional ways. She is the shift from the past to the present. She learns there is an easier life out there and she has grabbed it. When her parents face a storm that threatens to take down the yurt and their lives, they reprioritize. Now Sedna insists they must leave and find Ága, which may also mean she is ready to accept the new world.

Beautifully directed, using a cast with little acting experience, wise Milko Lazarov weaves a story with little rehearsal. “It seems to me that the actors should not know what the director has in mind. Then it becomes more authentic – there remains a slight anxiety, an anxiety. I have colleagues who seem to be excited by the fact that they are enlightening some of the actors. Everyone has an approach I guess. But when you choose an actor – you die in them. That’s what a great Russian pedagogue said. The actor becomes your avatar, he drives your ideas without knowing.”

The genius of Lazarov has garnered “Ága” 24 awards and 10 nominations for best film, best director and best cinematographer. The film is also Bulgaria’s selection for Best International Feature Film for the 2020 Academy Awards.