Review: In the Shadow of the Moon

Director Jim Mickle stays on safe ground with this routine, if well produced, sci-fi thriller. A serial killer stalks Philadelphia, offing seemingly random people in an outlandishly gruesome way. Lots of gore ensues, as the weapon of choice is a hemorrhagic toxin that kills people by making them bleed from pretty much everywhere. Detective Locke sees a pattern, but nobody seems to care. Sound familiar?

Yup, that is because it is familiar. Director Jim Mickle and writers Gregory Weidman and Geoffrey Tock had a good thing going at first, the exotic toxin resonating with the super-spy 2006 poisoning of Alexander Litvinenko in London. He was offed with isotopes and the film mentions that, but steers clear in favor of something even more powerful, and completely unknown.

A perp is sighted and tracked but that babe knows how to throw a punch and the two cops are down for the count. No news for another nine years, but time flies on the silver screen and more blood flows, like water even. As the multiples of nine build up, Locke (a yeoman-like Boyd Holbrook), wears down. Starting off like a spring chicken, he ends up kicked off the force, living in his car and sneaking gulps from a hip flask. Good enough acting, costumes and directing there, but the rest of the flick cannot keep pace.

Starting as a murder mystery, the story turns to sci-fi and loses its way. The sci in sci-fi is trashed in favor of a goldfish bowl with tentacles that provides an escape route for the killer. The totally unknown and unanalyzable toxin remains exactly that, seemingly treated like all the other shootings, stabbings and drug overdoses in the City of Brotherly Love. There could have been a side story there, but it is dropped like a hot rock.

As it turns out, there are no-goodnicks at work in Philly and the bad guy is really a good guy, but by the time that is sorted out we are more interested in seeing Locke end up in the drunk tank than solving the mystery.

Philadelphia plays well, the cold, gloomy streets and trashy alleys making for a suitably doomed-noire backdrop. There might have been a story there too. Maybe a toxin growing between Ben Franklin’s feet, or something. Anything. In the end, the story could have been anywhere.

The punchline has been seen, and heard, before. It could have been a contender, especially given supporting actor Michael C. Hall’s exemplary creep creds. Five-time Golden Globe nominee Dexter, the politically correct serial killer who only hits people who deserve it, could have leveraged something. Instead, he is cast as the straight arrow cop who never gets it. Hall looks lost, and understandably so. The science is fueled by nutso inventor Rao (a hilariously disheveled Rudi Dharmalingam) but his input is too little, too late. All that remains is righteous techie revenge in reverse. 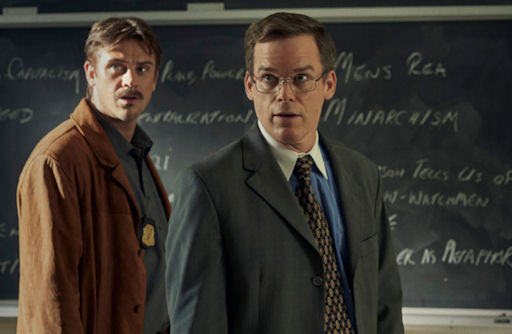