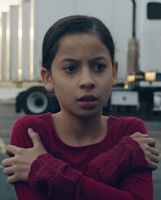 Coming home from school, 12-year old Itan and her younger brother, Neto, are shocked to find their house ransacked and their mother missing. Itan knows something bad has happened, but there is no one there to explain just what.

A dangerous shift occurs when precocious Itan, a promising science student planning to take an early SAT, decides that she and her little brother are going to find their mother on their own.

The fate of the mother, a parallel story, involves a series of mistakes (injustices) the US government inexplicably perpetrates in their process of efficiently apprehending illegal immigrants.

In his director’s statement, Richard Levien hopes “fixing these injustices can be a bipartisan issue. When people are made aware of things like immigrants not being guaranteed a phone call when detained, they are generally surprised that could happen in America.”

Levien’s script for “Collisions” was begun in 2009 in response to the deportation of the father of a student in his wife’s third-grade classroom. Though Levien is not making a case for open borders or a rewrite of immigration laws, the effect of his film does make a case for ethical treatment of those apprehended for illegal entry.

Heidi Levitt, executive producer, is applauded for outstanding casting as is Levien for his inspired directing. Twelve-year-old Izabella Alvarez heightens the tension in the film and the much younger Jason Garcia, Jr., who plays her brother, has the natural innocence of a little boy interested in becoming more independent of his bossy sister. They are natural performers who bring warmth and realism to the story.

Ana de la Reguera, well-known in Mexico for her work in movies and tv, brings a stunning dramatic gravitas as the incarcerated mother. Jesse Garcia, also a producer, plays the children’s ne’er-do-well alcoholic uncle who had a role in the death of their father. His complex character simmers with guilt and moral confusion.

In a private communication with ItsJustMovies.com, Levien revealed his goal was “to highlight injustices in our immigration enforcement system.” It is not a political attack on any specific president or party as “every injustice we highlight was present in previous administrations.”

Levien also elaborated on how the children became US citizens. “Yoana was pregnant with Itan when she first crossed 12 years before the story starts. Their father goes back to Mexico for a funeral six years before the movie starts (so Neto is very young, and Itan is six). [The father] dies trying to get back across.”

“Collisions,” a very sensitive film on US Immigration and Customs Enforcement practice, opens at Laemmle Music Hall in Los Angeles on Oct. 4 with a pre-opening night premiere at Ahrya Fine Arts on Oct. 3 at 7:30 pm.