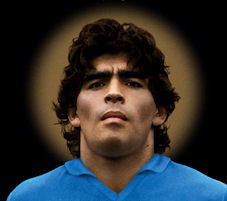 Born in the slums of Argentina, Maradona soared. The Golden Boy of 1980s world class soccer, his debut with Barcelona football club was the most expensive contract to date. The biggest paycheck with the most powerful club in the world. Still, Pele, his predecessor and holder of “best player” creds before the young Argentinian, described Diego Maradona with a hint of dread in his voice. “He has the quality, but he isn’t ready.”

Ready or not, there he went. To a spectacular two year flame out in Barcelona and then an even more spectacular rise to the top of world soccer in perpetually down and out Naples. Naples and Maradona were made for each other. The perfect union of crazy love, violence on and off the pitch and fans so passionately coupled to their star he lost sight of who he was, and what meant the most to him.

Oscar-winner Asif Kapadia helms this riveting look at one of the most spectacular arcs in sports history. Raquel Alvarez’ joined him as line producer after her work on the documentary of Cristiano Ronaldo, one of the few athletes in history who could claim to match the passionate following of Diego Maradona. Kapadia’s film creds include four BAFTA award winners, two of which are the spectacular stories of singer/songwriter Amy Winehouse and Brazilian Formula One racing driver Ayrton Senna.

A good documentary has a point of view, it cannot be simply archival footage. The story suggests that, in retrospect, Maradona should have stayed with Barcelona. He had better support there, both mentally and spiritually. In the opening scenes of the movie the Naples soccer club president is forced to denounce a question from the press about the notorious Camorra, an organized crime family that permeates every aspect of the city. Diego was mentally prepared for the brutal physicality of Italian football, but he was not prepared for the carnality laid at his feet by those who wished to control him and steal a bit of his limelight.

The film includes the best action shots of the most exciting soccer matches of the 1980’s. It also features an inside look at the endless training that makes top notch athletes world class. The shots of the pain of working to the edge of unconsciousness, and then staying there, are as real as they get. This suffering is only invited by those who have no fallback position. They are committed to do or die. Although he conquered the torture of exhaustion, he fell victim to the pleasures of adulation. His background had not prepared him to be a hero.

Director Kapadia’s camera goes far beyond recording the times and places that made the man. The shots look deep into the eyes, showing the pain and foreboding resting therein. Maradona survived, and the story concludes with interviews of the man in his mid-50’s. Abandoned by many fans after a disastrous and fateful win over Naples in the World Cup, he lost his political protection as he withered under the crushing strain of being a hero. Unfairly imprisoned after a failed drug test, jail may have saved his life. But his real life, the football pitch, was over. Regrets? See this fantastic sports documentary and judge for yourself. 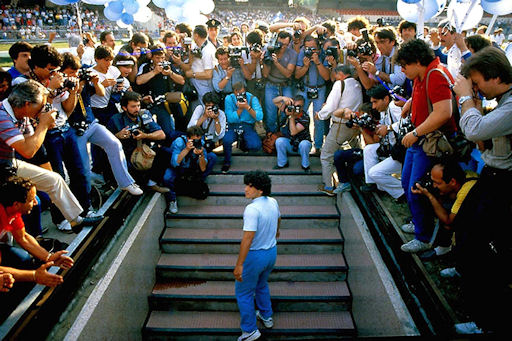