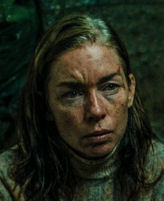 Children taking on adult roles is inherently scary. Perhaps it is scary to adults because we are afraid of what might happen if we were ever confronted with kids who had unquestionable, absolute control over everything we did. Combine that with a feeling of isolation so total you could cut it with a machete and the result is terror.

Teens with machine guns are stationed in the rock ruins of some long-abandoned village high in the Columbian mountains. Following the orders of a mysterious entity identified only as “The Organization”), their only contact with the outside world is a part time commander, mysteriously named Messenger, and stripped down staccato bursts from a seldom used radio. The movie starts with the soldiers in the presence of their officer, who drills them like adults. They stand at attention like adults, drill like adults and have AK-47’s like adults. The weapons are locked and loaded.

Writer/director Alejandro Landes (screenplay co-written with Alexis Dos Santos) builds on the horror of “The Lord of the Flies” with a pitch perfect adaptation of his novel. As the adult discipline begins to fall apart, the terror builds, especially with regard to the fate of hostage Sara Watson (Julianne Nicholson). The Organization has kidnapped her for ransom and the money she represents is a huge asset not to be lost. Lest we forget these adolescents are lethal, Watson is paired with various of them with increasing frequency as the movie goes on.

To underscore their low regard in the minds of their managers, the child soldiers are also given custody of a cow. The brutality of the situation is underscored when their drill instructor tells them the cow is every bit as important as the hostage. If either one is lost, a court martial will ensue, followed by summary execution.

The soldiers themselves, all the more powerful characters for being portrayed by first-time actors, are a riveting story. Superimposed on that is the story of Watson’s escape attempts, one of which has her nearly eaten to death by insects. The only thing more brutal than The Organization is the wilderness. Heat and insects will kill her if the killers do not find her first. If it is possible to die of simple filthiness, everyone in the movie would be dead halfway through.

In this movie atmosphere is everything and Mica Levi’s score makes it happen. Two of her five credits were nominated for BAFTA awards and one (“Jackie”) for the Oscar. This score is sure to join the list. It combines an eerily somber, funeral feeling with suspenseful dread. Reverberating with the breathtaking photography the score emphasizes what the camera is telling us, these kids are insignificant in the world they inhabit. They are vicious killers and vulnerable children at the same time.

Although the comparison to “Lord of the Flies” and “Beasts of No Nation” is inevitable, this film also taps into the paralyzing despair radiated by Claus Kinsky in Werner Herzog’s “Aguirre, the Wrath of God.” Nature kills not only through physical deprivation but by emotional evisceration. There is simply too much entropy to rationalize. The children have discipline when things are going smoothly, but their world is pressurized like a runaway boiler. When the balloon bursts there is no containing it.