Review: A Month of Sundays

“A Month of Sundays” is a slo-mo blossom unfurling its developing petals into an eventual multi-layered, delicately shaded glorious bloom of uncommon beauty. 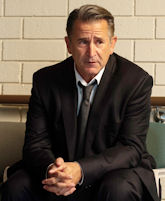 Writer-director Matthew Saville has delivered this fragrant corsage set in a cinematic environment shot by Mark Wareham that parallels the inexplicable slow reveal of Frank, played with courageous subtlety by Anthony LaPaglia, a master of his craft, who is at the bottom of his dark abyss. Estranged from his newly successful wife and troubled son, he is alone in an efficient little cottage in a modest Australian neighborhood when he receives a phone call from his mother. They talk. She remonstrates that she hasn’t heard from him for awhile. He gets irritated and gives her false excuses. The banter continues until he asks her what her name is.

It is here that the unfurling begins in the most wondrous ways.

Though her voice is familiar, and though neither has a progressive memory disease, this woman with the soft voice is not Emily, Frank’s mother. Sarah, played with strength and character by the lovely Julia Blake, has misdialed. Even so, he finds out where she lives and pays a visit.

The audience is surprised when they learn that Frank’s mother, Emily, actually died 7 months ago. But how often have we wished for one more call, one more letter, one more visit? He was not with her in the end and had not been actively attentive. He is fully cognizant of the fact that he has been a lousy husband, father and son. He has retreated from life and needs help. Sarah invites him in for tea and then Sunday dinner with her son.

The story is not all about Frank being helped to resolve the death of his mother and his retreat as a human being. Sarah has a secret and it turns out that Frank can be of unique help. As a matter of fact, as the plot develops, there are multiple layers and multiple people he, quite inadvertently, assists. And it is in this innocent helping that the simple, matter-of-fact beauty of the story is gradually exposed and comes to fruition.

Yes, I’m sold on this class act film. From the cinematography, writing, acting and choreographed music that matches each move and emotion, Saville has created a slow but sure masterpiece of uncommon insight. Sit still for the first 20 minutes and you will become captivated and rewarded.