It is hard to imagine anyone not being thrilled to sit on an ice floe in the pristine Antarctic and have penguins file past you, casually diving into the ice-slushy water for an afternoon meal. Watching this movie, it is hard not to feel sad knowing that this kind of unspoiled wilderness is rapidly disappearing. 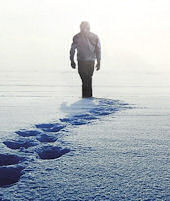 The reason the wildlife are so friendly is because there are so few humans. As “Antarctica: Ice and Sky” writer/director Luc Jacquet previously illustrated in his Oscar-winning “March of the Penguins” (Best Documentary 2006), the minus 70 dF temperatures are hard enough for the penguins, and quite lethal for humans.

This is the story of the scientific studies of Claude Lorius, the man credited with developing the first conclusive evidence of man-made climate change. On his first trip the geologists learned to live through the winter in ice caves carved into the rock-hard ice. No structures could survive the wind and cold, so they burrowed into the ground. As they found out, their supplies were soon covered in snow and ice and had to be periodically dug out. Machines broke down, instruments were wrecked and rebuilt. Survival was a 24-hour job.

It is not hard to see why research was slow in coming. Pondering this environment of ice and sky, Lorius realized that every snowflake that fell included a piece of history. Air trapped in the snow became a historical artifact that told the chemical makeup of past atmospheres. Interesting enough, but the new technology of the mass spectrometer chemical analyzer made this a game changer. The first thing he did was to fix the dates of every above ground nuclear bomb test, to the day, by testing the air in thawed ice specimen bore samples, inch by inch. A powerful reminder that changes we make in the environment do not go away when the smoke clears. Those changes are with us forever, and they cannot be reversed.

The Antarctic is a vast library of this history, with ice sheets over 10,000 feet deep. By boring down to these depths Lorius reconstructed the temperatures and carbon dioxide content of air hundreds of thousands of years ago, and even estimates variations in sea level. The result is a pattern of global warming and ice-age cooling that has dictated life on earth.

The conclusion is that the earth is warming, apparently because of fossil fuel CO2 emissions, at an unprecedented rate. Not a huge surprise, but the simplicity and clarity of his explanations raise this fact-finding to a level far above the proclamations of politicians or environmental activists.

Accompanying this decades-long detective case is the spectacular scenery and the incredibly brutal weather of the south pole. If this environment ever came to the population of the temperate climates we would be gone, as extinct as the dinosaurs. A wonderful combination of explorer survivalist adventure and crucially important science, this film is not to be missed by science buffs and everybody else with an ounce of concern about global climate change.